University of Missouri officials announced today that George P. Smith, Curators Distinguished Professor Emeritus of Biological Sciences and recipient of the 2018 Nobel Prize in Chemistry, has chosen to donate his Nobel Prize money to support students in the College of Arts and Science.

Smith and his spouse, Professor Emerita Marjorie Sable, made the announcement at the end of a community event that highlighted the Nobel Week experience for Smith, his family and others who travelled to Sweden in December.

This gift of more than $243,000 marks the start of Mizzou Giving Day, an annual event that raises support for Mizzou’s schools and colleges. MU and the University of Missouri System contributed additional funds that raised the total to more than half a million dollars. Additional funds include:

“Time and time again we have been overwhelmed by George’s incredibly humble attitude, and today we are amazed even further by his spirit of generosity,” Cartwright said. “Gifts such as these make it possible for more students to attend our university and have the experience of being taught by other world-class faculty. We continue to be so very thankful for George and Margie’s support of Mizzou.”

Anyone who wishes to add to the Missouri Nobel Scholarship Fund can donate during this year’s Mizzou Giving Day, which runs from noon Wednesday, March 13, to noon Thursday, March 14. Gifts to the fund will continue to be matched dollar for dollar under the Promise & Opportunity Scholarship Program.

In December, Smith, Cartwright and a small group of student reporters from the Missouri School of Journalism traveled to Stockholm, Sweden, to experience Nobel Week. While in Stockholm, Smith received his prize, explored opportunities given only to Nobel Prize winners and met with Swedish royalty. Meanwhile, Meg Cunningham, senior convergence journalism major, and Savannah Rudicel, senior broadcast journalism major, had the rare opportunity to report on all the pomp and circumstance.

During the event Tuesday evening, Smith began with a short lecture on phage display, the evolutionary biology process that won him the prize. The lecture was followed by a panel discussion where Smith, Sable, Cartwright, Okker, Cunningham and Rudicel shared what they experienced in Stockholm. The event concluded with an announcement from Smith that he and Sable had chosen to donate the prize money to MU. The gift reflects their continued support for students who choose to pursue the arts and sciences.

“This might surprise some people, but my first degree was actually a bachelor of arts, not a bachelor of science,” Smith said. “My liberal arts education was the springboard for a lifetime of learning and cultural engagement. Margie and I hope that supporting the liberal arts as a whole will enrich the lives of future Mizzou students, whatever careers they choose.” 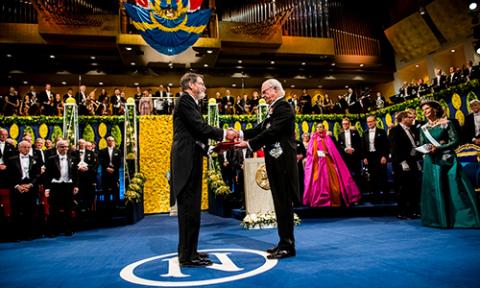