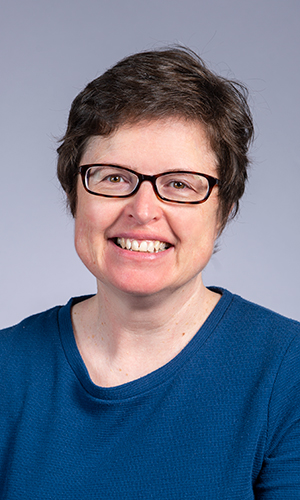 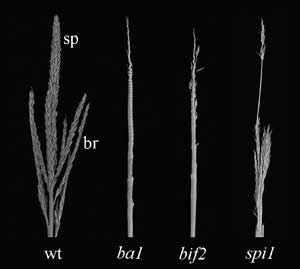 Unlike animals, which make organs only during embryogenesis, plants make organs throughout their lifetime through the action of specialized groups of cells called meristems. Meristems function by setting aside groups of cells to become organ primordia while maintaining a population of undifferentiated cells to support further growth. My lab focuses on axillary meristems, which give rise to branches and flowers and therefore play a fundamental role in plant architecture and reproduction. The goal of our research is to understand how the hormonal signal for axillary meristem initiation is perceived and transmitted to cause the changes in gene expression, cell division and expansion required for the formation of an axillary meristem.

Using a genetic approach, we have identified many mutants with defects in the development of axillary meristems in the maize inflorescence. Characterization of each mutant tells us the biological function of the gene that has been disrupted. Identification of the corresponding gene by positional cloning enables us to determine its mechanism of action using molecular, biochemical and cell biology approaches. Many of the genes defective in these mutants regulate the transport, biosynthesis or signaling of the plant growth hormone auxin, illustrating the importance of this hormone in the process of axillary meristem and organ initiation.

One of the projects we are working on involves the barren inflorescence2 (bif2) mutant, which makes fewer branches and flowers due to defects in the initiation and growth of axillary meristems. bif2 encodes a serine threonine protein kinase expressed in axillary meristems and organ primordia. BIF2 regulates auxin transport by phosphorylating ZmPIN1a, which encodes an auxin efflux transporter. BIF2 also interacts with and phosphorylates BARREN STALK1 (BA1), a bHLH transcription factor that plays an important role in axillary meristem formation. Another project involves the sparse inflorescence1 (spi1) mutant which has a similar phenotype to bif2 in the inflorescence. spi1 encodes an enzyme involved in localized auxin biosynthesis showing that both local synthesis and transport of auxin are required for axillary meristem initiation in the inflorescence. spi1; bif2 double mutants have very severe effects on vegetative development indicating that auxin transport and biosynthesis also play an important role in vegetative development.

Current research uses genetic, genomic, molecular, biochemical, cell biology and physiological approaches to understand the gene regulatory network controlling auxin mediated development in the maize inflorescence. We are currently characterizing and cloning many new mutants with defects similar to spi1 and bif2 as part of an NSF Plant Genome project. Through comparison of the role of these genes in maize versus other plant species we are developing an understanding of the evolution of the role of auxin in plant development.

Fellow, American Association for the Advancement of Science, 2020

See Google Scholar for a list of Dr. McSteen's publications.