Why some flies learn, remember better than others

Even a tiny, small-brained fruit fly can learn simple tasks and form memories. And, like people, some flies can learn and remember better than others.

A team of biologists at the University of Missouri has identified a set of genes responsible for the natural variation in learning and memory performance in the fruit fly Drosophila melanogaster. The study, led by doctoral candidate Patricka Williams-Simon in the laboratory of Dr. Elizabeth King, appears online in the scientific journal Genes, Brain, and Behavior.

Fruit flies are good model systems for exploring the genetic basis of human behaviors because many of their genes are similar to our own. Plus, scientists can subject flies to experiments that can’t be done in humans. For learning and memory, most of these experiments have involved “turning off” a single gene and observing the effect on a fly’s ability to learn or form memories. The current study goes well beyond this one gene approach.

“We looked at the whole genome and asked what regions of the DNA determine the natural variation we see in these complex traits. From this, we were able to identify nine potential genes that are associated with high and low performance,” said King, who is an assistant professor of biological sciences at MU and the corresponding author of the article.  “The study represents a critical step toward expanding our understanding of the genetic mechanisms determining differences in these fundamental traits in natural populations.”

To measure learning and memory, the researchers placed a fruit fly in a specialized chamber outfitted with heating elements. When the fly moved to a particular side of the chamber, the floor rapidly heated to an uncomfortable temperature, causing the fly to retreat to the cooler side of the box. The scientists measured learning as a fly’s increasing ability to avoid the hot-side of the chamber and memory as a fly’s persistent avoidance of that side even when the heat (negative stimulus) was removed.

“Some flies learn fast and remember to stay away from the heated side, whereas some flies take longer to figure it out,” said Williams-Simon, who was awarded a Gilliam Fellowship for Advanced Study from the Howard Hughes Medical Institute to support the research. “We repeated the experiment with over 40,000 individual fruit flies from over 700 different lines, or genotypes, to establish variation in performance. We then focused in on the high and the low performers.” 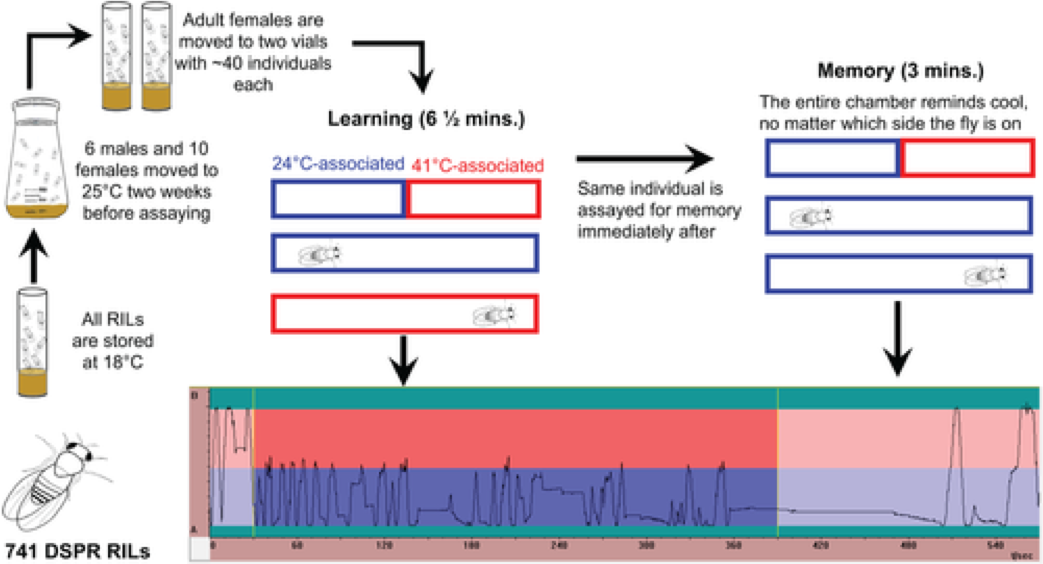 A schematic showing how the researchers measured learning and memory performance in the fruit flies. This individual fly has a higher learning score because it spent less time on the hot side, whereas its memory score is medium (Source: Genes, Brain and Behavior. 2019; 1–16. https://doi.org/10.1111/gbb.12581)

Next, the researchers wanted to know which specific genes might be responsible for the effect on a fly’s ability to learn and remember. To find out, they used a next-generation sequencing technology, called RNA-seq, to see which genes in these regions are turned on or off or up and down in high and low performing flies. From these results, they were able to hone in on nine genes that appear to be differentially expressed between the two groups.

“All of these genes are known to affect the nervous system or the brain in some way, but none of them had previously been implicated in learning and memory. They therefore represent novel target genes to further investigate these behavioral traits,” said King.

Williams-Simon said that the study is basic research but added that the genes that underlie how flies learn and remember are likely to be similar to the genes that operate in humans. “The better we understand these traits in fruit flies, the more we can develop targeted studies in humans,” she said.

For the study, the researchers took advantage of a special fruit fly population called the Drosophila Synthetic Population Resource or DSPR. Instead of two founding parents, the population is derived from eight diverse parent lines whose genetic makeup is known. The multiparent population approach allows researchers to pinpoint precise areas of a genome that contain genes that tend to be inherited with a trait of interest and then rapidly trace those to one of the eight original founding lines. This is the first study to use this genetic approach to study learning and memory.

“Our study opens up the potential for any number of follow-up studies using these same lines, investigating intermediate phenotypes along the genotype to phenotype map in a highly controlling way, something that is not possible in mapping studies in humans,” said King. “Only through these kinds of systems-level approaches can we hope to achieve a broader understanding of what makes an individual perform well or poorly at a learning or memory task.”

The authors acknowledged the contributions and leadership of Troy Zars to the study. Zars, who passed away last winter, had a distinguished career in the area of neurobiology of learning and memory. King said that Zars recognized the potential of the DSPR to shed new light on the genes that influence these important traits. “There is no way this project would have happened without his leadership,” she said.

“He was so excited and passionate about the project,” added Williams-Simon, who carried out the behavioral studies under Zars’ direction and using the heat box machine he helped to develop. “Every time I found something new, he would exclaim, ‘Yay! We’re getting closer!’” 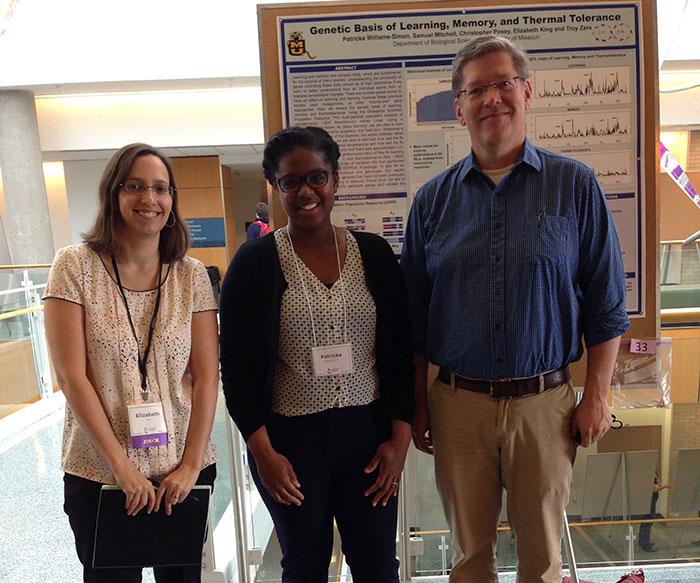 Williams-Simon with her co-mentors, Dr. King and Dr. Troy Zars.

The work was performed with funding from a National Science Foundation grant (IOS-1654866), a Howard Hughes Medical Institute Gilliam Fellowship for Advanced Study, and a National Institute of Health IMSD (R25GM056901). 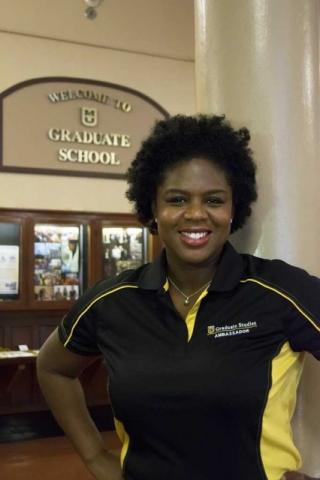