Wanda Figueroa-Cuilan knows what it’s like to overcome obstacles.

Growing up in the small, coastal town of Arroyo in southern Puerto Rico, one of the first challenges she confronted was language.

“Back home, if you grow up in the city, the chances are that you’ll be bilingual. But in underserved rural areas, like where I grew up, you just learn Spanish. This is the unfortunate reality of so many talented Puerto Rican kids, even though Puerto Rico is an American territory,” Figueroa-Cuilan says.

Figueroa-Cuilan admits the impact of this inequality didn’t hit home for her until she got to college.

“My first month at the University of Puerto Rico was traumatic,” she recalls. “My textbooks were in English. Studying and going to classes became a whole lot harder. I even applied to do research and was rejected simply because my English was not up to their standards.”

Aggrieved but undeterred, Figueroa-Cuilan used some of her scholarships to enroll in English classes, which she took at night on top of her full load of university science courses. During her junior year, she reapplied to the same research program, and this time was accepted. She says it was a defining moment for her.

“Right then it became clear to me that you should never let your past circumstances determine who you want to become in life. You should just work hard for your goals, and never, ever lose hope in yourself,” she says.

Today, Figueroa-Cuilan is pursuing her Ph.D. in the Division of Biological Sciences. She is carrying out her research on the enzymatic mechanisms of key proteins involved in bacterial cell separation. Her research has already yielded a new technique for studying essential genes in bacteria, a discovery that landed her a first-author publication in a top scientific journal.

When Figueroa-Cuilan is not staring at bacterial cells under a microscope, she often can be found mentoring other students as an active member of the Society for Advancement of Chicanos/Hispanics and Native Americans in Science (SACNAS). She says because of her own experience she has become passionate about helping students with limited means achieve their goals.

“I look back at the things I struggled with and it motivates me to want to help others who have their own obstacles to overcome. It’s hard for me to see someone struggle and to think of possibly losing them just because of the way the world is,” she says.

Figueroa-Cuilan’s efforts to help her fellow graduate students was one reason cited for why she was selected to receive the 2018 Outstanding Graduate Student Award from the MU Graduate Student Association (GSA). The annual award celebrates a Ph.D. student who excels in their program and also “demonstrates exemplary promise in leadership, scholarship, service, and character and has distinguished themselves based on the MU core values of respect, responsibility, discovery and excellence.”

Rebecca Lukasak, the GSA representative for the Division of Biological Sciences who nominated Figueroa-Cuilan for the award, says she was a clear choice for the award.

“Wanda truly does go beyond what it means to be a graduate student,” Lukasak says. “Not only has she achieved great things in the lab and is driven in her pursuit of higher education, but she also cares about the people around her and is very compassionate. She does so much work to help those around her, and she shows no signs of stopping that anytime soon.”

“Wanda has helped me personally by training me in techniques when it was not her job to train me and encouraged me when my imposter syndrome kicked in,” Attai says. “Wanda exemplifies a selflessness and excellence while remaining humble and kind. I may sound biased, but ask anyone who knows her, and they will tell you the same. Her role in the department is palpable.”

Figueroa-Cuilan, who was honored at the Graduate & Postdoctoral Awards Banquet last May, says she was surprised to have been chosen for the honor.

“I totally didn’t see it coming. I’m very happy about it,” she says. “Just the fact that people took time to nominate me makes me very honored and happy.”

“This award is particularly meaningful because it comes from my peers, who I think are amazing. I’m incredibly grateful to have them in my life,” she adds.

Assistant Professor Pamela Brown is Figueroa-Cuilan’s Ph.D. mentor. She says she was not surprised that her mentee was nominated and selected for the award.

“Wanda is truly deserving of this honor,” says Brown. “She is an accomplished and ambitious researcher who is fearless in her approach to tackling complex research questions, a valued mentor with real talent for motivating and challenging undergraduate researchers, and a passionate advocate for minorities in STEM disciplines. She is an exceptional graduate student, and I’m thrilled that her outstanding efforts as a researcher, mentor, and advocate have been recognized by the Graduate Student Association.” 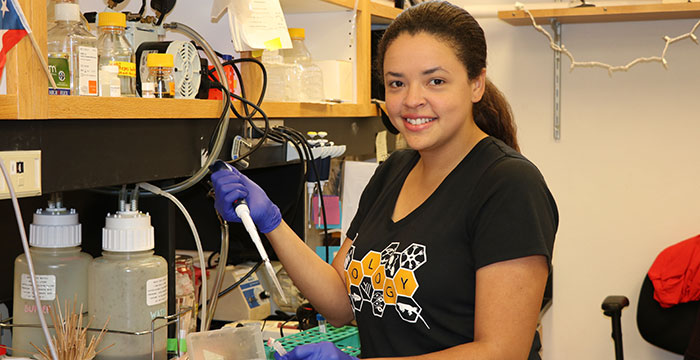 For her doctoral research, Figuero-Cuilan is identifying and functionally characterizing enzymes involved in bacterial cell growth and separation.

Figueroa-Cuilan is an unabashed science fair nerd. Prompt her and she can even tell you about her very first science project.

“I was 8, and I wanted to understand why ants like sugar but not salt. My mom helped me design a simple experiment,” she recalls. “From that point on, I was really into science fairs, and I would enter one every year.”

In high school, she designed an experiment to test the antimicrobial properties of mango tree leaves. She says the project was inspired by a folk remedy her grandmother used as a child.

“She would make an infusion made with the leaves of mango trees and used it as a mouthwash. She remembered that it used to work very well to help with bad breath,” recalls Wanda. “I wanted to do a project in honor of my grandma, so I exposed mouth bacteria to mango extract to see what would happen. And, it worked. I submitted the entire project into a scientific fair, and I won the regionals.”

At that point, Figueroa-Cuilan says she was hooked on science for good.

In 2008, Figueroa-Cuilan headed north to the city of Cayey to attend the University of Puerto Rico, where she was studied biology. As a junior, she was accepted into the highly competitive and prestigious Research Initiative for Scientific Enhancement (RISE) Program, which provided her not only with hands-on experience doing research and professional development in the lab techniques, but also opened the door for an undergraduate summer research internship at North Carolina State University (NCSU).

“My summer research experience at NCSU was definitely the trigger for wanting to come back to the mainland to do a Ph.D.,” says Figueroa-Cuilan

In 2012, she moved to Columbia to do research as a scholar in the MU Post-baccalaureate Research Education Program (PREP) Scholar. She was accepted into the Ph.D. program in the Division of Biological Sciences in 2014.

“My doctoral research focuses on identifying and functionally characterizing peptidoglycan hydrolases, which are enzymes involved in bacterial cell growth and separation,” she explains. “Learning more about these proteins and how they are regulated not only will add to the field’s knowledge of these critical enzymes — many of which could be promising antibiotic targets — but also will expand our basic understanding of how bacterial cells grow, divide, and separate.”

While Figueroa-Cuilan says she has been interested in microbiology ever since her high school science fair project, she credits her Ph.D. mentor, Pamela Brown, as being the real catalyst for her passion for bacteria.

“After meeting and talking with Dr. Brown, I just fell in love with microbiology. She made studying bacterial cells and how they grow and divide just so incredibly appealing and fun, which led me to first rotate and then pursue my Ph.D. in the field,” she says. “She is the best mentor any graduate student could ever have.”

After completing her Ph.D., Figueroa-Cuilan plans to pursue a postdoctoral academic position. Beyond that, her goal for the future is to combine her passions for research, teaching, and mentorship by becoming a professor herself. 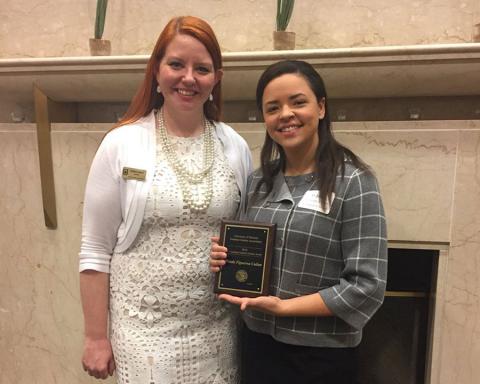