For David Schulz, mentoring is the ultimate embodiment of the “pay it forward” concept.

“No one who is in a position to mentor others without themselves having been the recipient of invaluable guidance,” he said. “Every day, I see the influence of my mentors’ guidance in my interactions with my own students, and every day I am grateful for it. It’s my privilege to do the same for the students I am lucky enough to work with.”

While Abigail Beckerdite has clearly inherited her mentor’s grateful disposition, she still wanted to find some way to acknowledge him now. The junior biological engineering major recently nominated Schulz for the Ann K. Covington Award, which honors faculty who have served as mentors to undergraduates seeking nationally competitive fellowships.

Schulz, a professor of biological sciences, was one of two faculty members selected for this year’s award. Sponsored by the MU Fellowships Office, the award is initiated by student nominations. Schulz said that being nominated by students makes the honor “exceptionally meaningful.”

“It’s hard for me to recall a more humbling experience in my time at Mizzou than receiving this award,” he said. “To have a student not only think enough of me take the time to nominate me for something like this, but to hear them read the reasons why they were moved to do so was exceptionally meaningful. I am grateful to Abby, and all my students, for putting some of their faith in me to help get them where they want to go.”

Beckerdite, who has been conducting electrophysiology research in Schulz’s lab since her freshman year, lauded Schulz as a caring mentor.

“He showed me early on that he cares for his students on another level from most professors,” she wrote in the letter nominating Schulz for the award. “He genuinely wants the best for me regarding my future career goals and personal life. He makes me feel proud of my accomplishments and wants to help others succeed as well.”

Beckerdite described the many ways that Schulz goes above-and-beyond to help students advance their academic and professional goals. For her, that included applying for the Barry M. Goldwater Scholarship, the Hesburgh Scholarship, and the Life Sciences Undergraduate Research Opportunity Program. While his support included writing letters of recommendation and helping her craft competitive proposals and applications, she said it also went well beyond that.

“Dr. Schulz has set me up for success and given me a sense of home, community, and a family here at Mizzou,” she wrote.

Covington, the award’s namesake, was a member of the UM Board of Curators, a former Missouri Supreme Court chief justice, the first woman to serve on the state’s Supreme Court and a long-time champion of the University of Missouri.

Schulz was presented with the award at a reception on April 24. 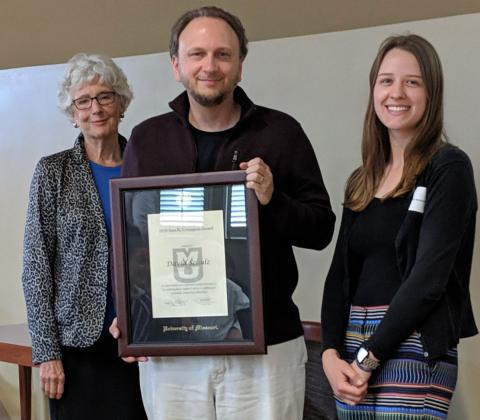