The award, which comes with a $1000 prize, recognizes exceptional research promise of an early career faculty member.

“I am very proud of the research group I’ve built here at Mizzou, and I am really excited about the scientific contributions we have made,” King said. “None of that would have been possible without the amazing support I’ve gotten from my department, my former mentors, and the investment in my lab by the University. It means a lot to me that our efforts have been recognized and it makes me even more motivated to strive toward making new discoveries, and to do my best to foster the success of my students and postdocs.”

When King joined the faculty in the Division of Biological Sciences in 2014, she brought with her a distinct skillset for tackling one of the biggest challenges in genetics — how molecular genetic variation is translated into organismal phenotypes. Her research, which focuses on how organisms allocate their energy to key traits and how this strategy is coordinated with the nutritional environment, combines large, long-term empirical experiments, mathematical modeling, computational techniques, and modern genomic approaches. She also brought a powerful new resource for investigating the genes that underpin complex traits, the Drosophila Synthetic Population Resource (DSPR), which King was instrumental in developing as a postdoctoral fellow at the University of California at Irvine.

James Birchler is a Curators’ Distinguished Professor of Biological Sciences and was elected a member of the National Academy of Sciences for his scientific contributions to the field of genetics. Birchler, who uses Drosophila in his own research, said the large collection of Drosophila stocks represents a significant advancement for genetics.

“The DSPR will allow the whole genome to be surveyed for genetic factors that affect the particular trait being studied with very high power because of the large number of lines in the panel,” he said. “The development of this valuable community resource took an extensive knowledge of quantitative genetics, genomics, statistics, mathematical modeling and computation, all areas for which Dr. King is highly conversant.”

King is using the DSPR in her own lab to investigate the genetic mechanisms and evolution of how organisms allocate their limited pool of energy to key traits and, particularly, in how they coordinate their allocation strategy with their nutritional environment. With $1.6-million grant from the National Institutes of Health, she is allowing fruit flies to evolve on different diets to uncover what genetic and physiological changes lead them to adapt to their diet. The project has led to new insights about an insulin-signaling pathway, called IIS, that is important in the regulation of metabolism and, hence, obesity.

“This project speaks to her creativity and courage to take the path-less-traveled,” said Tony Long, a professor in ecology and evolutionary biology at UC-Irvine. “Unlike thousands of papers that studied IIS, Dr. King will take a novel tack and treat IIS as the rheostat that an organism uses to allocate resources between reproduction and somatic maintenance. I believe looking at the pathway in this light can lead to fundamental new insights.”

Having developed the analytical machinery for the DSPR, King has been invited to collaborate with many other users of the resource, who are exploring the genetic basis of many different complex traits. One of those collaborations is with fellow Mizzou biologist, Dr. Troy Zars. They were awarded a grant from the National Science Foundation to use the DSPR to uncover the genes that give rise to variations in learning and memory.

John C. Walker is a Curators’ Distinguished Professor and director of the Division of Biological Sciences. He said King stands out in areas other than research.

“She has an excellent mentoring record, her teaching record is outstanding, she has developed a new and sorely needed graduate-level course on quantitative methods, and has been an extremely valuable citizen of our department,” he said. “Dr. King is very worthy candidate of this award because she is outstanding.” 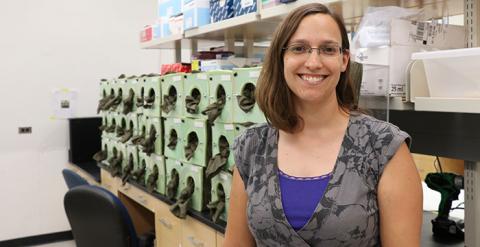