Rex Cocroft was recognized for his seminal research on insects that communicate through substrate vibration rather than sound.

Professor Rex Cocroft has been named this year’s recipient of the Animal Behavior Society’s Quest Award. The award honors outstanding seminal contributions to the science of animal behavior.

“I was certainly surprised and humbled to get this award, and the recognition from my colleagues means a lot to me, ” said Cocroft, who was presented with the Quest Award at the 56th Annual Conference of the Animal Behavior Society held at the University of Illinois at Chicago in July.

Cocroft studies treehoppers, a diverse group of plant-feeding insects that spend their brief lives living on plant stems. Unlike insects that signal to one another through audible sound, like crickets, these tiny bugs communicate with one another by vibrating the plant stems on which they live. Using specially designed recording and amplifying devices attached to plants, Cocroft is able to convert these insect vibrations into audible sounds and decode their messages. His studies have shown that treehoppers use these vibrations to attract mates, to announce the discovery of a good feeding site, or to alert a defending mother to the approach of a predator, demonstrating the richness and complexity of this widespread yet “hidden” form of social communication.

More recently, Cocroft showed that the plants themselves are also listening in on these communications. Together with the lab of Heidi Appel, his lab demonstrated for the first time that a plant can detect the vibrations produced by a chewing herbivore and respond by releasing a chemical that discourages the hungry pests. The novel discovery show that plants are not passive bystanders when insect-generated vibrations travel through their stems and leaves.

Cocroft’s research has been the topic of two “Radio Expeditions” by National Public Radio and featured in two television documentaries as well as by National Geographic.

He is the second MU biologist to receive the prestigious award. Dr. H. Carl Gerhardt was selected for the award in 2005. 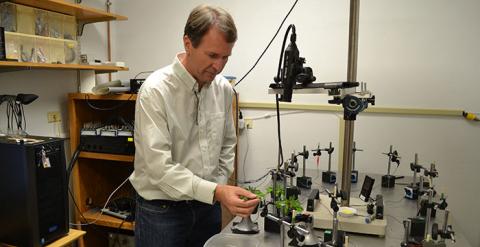