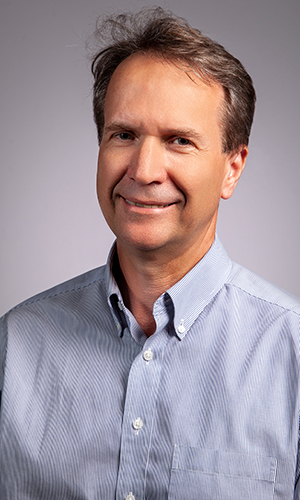 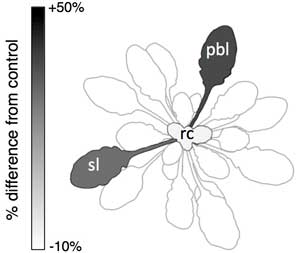 Playback of caterpillar feeding vibrations increased the induced response of Arabidopsis thaliana to herbivore damage. Grayscale map shows the increase in aliphatic glucosinolates in the playback and same-age systemic leaves, expressed as the percent change from the levels in controls.

We study the evolution of communication and its role in divergence, speciation and social behavior. Our study animals are plant-feeding insects. Social and ecological interactions among herbivorous insects often involve substrate-borne vibrations, so we also investigate the important features of this widespread but under-studied form of communication. Furthermore, because mechanical vibrations provide information about the activity of plant-dwelling arthropods, we have recently begun investigating the plant’s ability to perceive herbivore-generated vibrations and respond adaptively to them.

Plant perception of herbivore vibrations: Plant-feeding insects are among the most abundant and diverse organisms on earth, with a major impact on both natural ecosystems and agriculture. An insect on a plant gains much of its information about the environment from the mechanical vibrations produced by predators, competitors, or potential mates on the same plant. In collaboration with Dr. Heidi Appel (MU Bond Life Sciences Center), we are investigating plants’ ability to respond adaptively to vibrational cues of herbivory.

Collective decisions: Communication is central to collective behavior in many animal groups. We are studying collective communication in the thornbug Umbonia crassicornis, in which mothers defend aggregated offspring from predators. The group signals of offspring provide directional information that alerts the mother to both the predator’s arrival and its location, a process we are studying using experimental, observational and modeling approaches.

Signals and speciation: What role do communication systems play in assortative mating between diverging populations? And how do the ecological changes that accompany diversification shape the communication systems used in mating and other social interactions? The Enchenopa binotata species complex of treehoppers is one of the most widely cited examples of sympatric speciation in plant-feeding insects. The eleven species in this clade are host plant specialists that may have diversified as a consequence of changes in host use. We have been investigating the patterns and processes of divergence in mating signals in the E. binotata complex, focusing on the consequences of signal evolution for assortative mating and sympatric divergence.

Vibration localization: For vibrationally-communicating species, many interactions involve locating the source of a substrate-borne vibration. In the insects we primarily work with (membracid treehoppers), mating involves duets between mobile males that home in on the signals of stationary females; maternal care involves locating a predator based on information provided by offspring signals; and recruitment to a new feeding site in group-living species involves signaling by scouts that find a new site, followed by convergence on that site by the rest of the group. Given the centrality of localization to membracid social behavior (and that of many other vibrationally-communicating organisms), we study the mechanisms by which individuals find the source of a substrate vibration.

See Google Scholar for a list of Dr. Cocroft's publications.