Killing cancer by unleashing the body’s own immune system 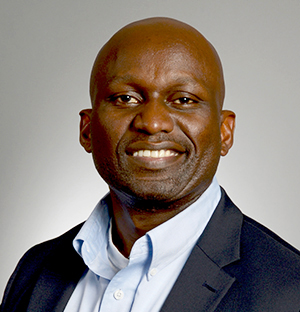 University of Missouri scientists demonstrate a new bacteria-based strategy for turning the body’s own immune system against cancer.

“Normally, your body’s immune cells are constantly on patrol to identify and destroy foreign entities in the body,” said Yves Chabu, an assistant professor in the Division of Biological Sciences. “Normal cells put up a ‘don’t-eat-me’ molecular flag that is recognized by immune cells, thereby preventing destruction of normal tissues. But some cancers have also developed the ability to mimic normal cells and produce this ‘don’t eat me’ signal. As a consequence, the immune system fails to recognize the cancer as a defective tissue and leaves it alone, which is bad news for the patient.”

Immunotherapies are cancer drugs that essentially block the "don’t-eat-me" signal coming from the cancer and allow the immune system to kill it. Chabu, whose appointment is in the College of Arts and Science, said while these immunotherapies work for certain types of cancers, prostate cancer is highly immunosuppressive, meaning the cancer’s physical and molecular environments simply overpower the body’s immune system. But Chabu might have unlocked a solution with help from a more than 50-year-old strain of bacteria. 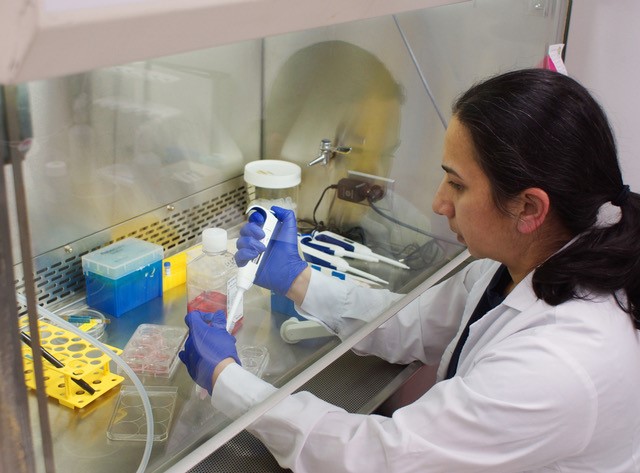 Bakul Dhagat-Mehta with the Cancer Research Center is working on a research team with Yves Chabu to demonstrate a new bacteria-based strategy for turning the body’s own immune system against cancer. Dhagat-Mehta has a courtesy appointment with the Division of Biological Sciences at the University of Missouri. Photo courtesy of Cancer Research Center.

“Cancers are different in one individual to the next, even when they affect the same tissue,” Chabu said. “These interpersonal differences contribute to whether or not a particular therapy will effectively kill the cancer and help the patient. The bacteria itself is genetically pliable, therefore it can be genetically modified to overcome patient-specific therapeutic limits. Imagine a patient whose cancer isn’t responding to traditional therapies and has no other treatment options. One can envision genetically modifying the bacteria such that it can unload therapeutics that specifically exploit that cancer’s unique vulnerabilities and kill it.”

In a previous study, scientists at the Cancer Research Center and the University of Missouri developed a genetically distinct and non-toxic strain of salmonella called CRC2631 to select and kill cancer cells. CRC2631 was derived from another strain of salmonella that had been stored at room temperature for more than half a century. Now, scientists like Chabu are demonstrating the ability for CRC2631, which enthusiastically targets cancerous tumors, to be used to unleash the body’s immune system against prostate cancer.

“Because CRC2631 preferentially colonizes tumor cells, the effect is mainly localized to the tumor,” Chabu said. “The use of CRC2631 to design and deliver patient-tailored therapeutics foretells potential in precision medicine, or the ability to tailor a treatment to a specific patient.” 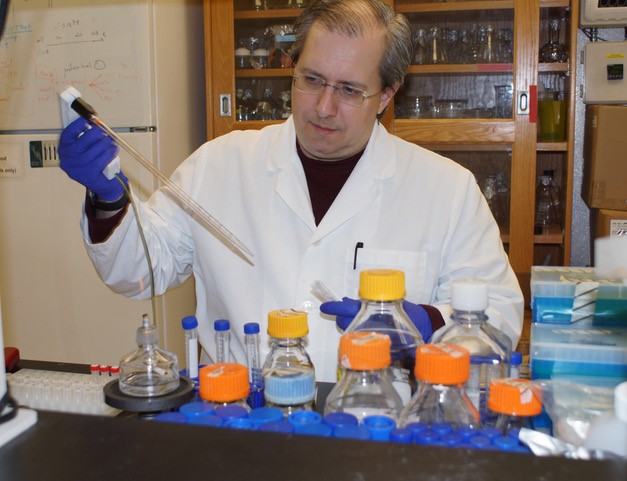 Highlighting the promise of personalized health care and the impact of large-scale interdisciplinary collaboration, the University of Missouri System’s NextGen Precision Health initiative is bringing together innovators from across the system’s four research universities in pursuit of life-changing precision health advancements. It’s a collaborative effort to leverage the strengths of Mizzou and entire UM System toward a better future for Missouri’s health. An important part of the initiative is the construction of the new NextGen Precision Health building, which will expand collaboration between researchers, clinicians and industry leaders in a state-of-the-art research facility.

“Evaluations of CRC2631 toxicity, tumor colonization, and genetic stability in the TRAMP prostate cancer model,” was published in Oncotarget. Funding was provided by the Cancer Research Center.