Joshua Jones says his interest in biology began in high school, where he had great teachers, including his advanced practice biology teacher who had earned her doctorate and talked to him about going to college and doing research.

The St. Louis native says he originally thought he would take biology in college on his path to becoming a doctor, until he heard about opportunities for undergraduate research. During his freshman year at Mizzou, he contacted Associate Professor of Biological Sciences Manuel Leal and told him he was trying to choose between going to medical school or going to graduate school once he completed his undergrad studies. Jones asked Leal if he could join his lab, where the main focus is on behavioral and evolutionary ecology, with a particular interest in lizards. While he quickly discovered a passion for scientific inquiry, he says he had trouble picking a focus for his research.

“Then last summer, I went to Boston for a Research Experience for Undergraduates program where I did microbial research, and I decided that was a lot more interesting, so I switched my focus from behavioral ecology to microbial ecology,” he says.

Jones will continue studying microbial ecology when he begins graduate school at the University of Indiana Bloomington this fall, where he enrolled in the Evolution, Ecology, and Behavior program under the direction of biology professors Armin Moczek and Irene Newton.

“I was interested in the work of those professors, both of whom do microbiome work,” Jones says. “Moczek has dung beetles, and he has conducted research on how their different body sizes are determined by temperature or the nutrients they consume.”

Jones says reaching out to Leal and establishing a relationship with him during his freshman year has been a key to his success.

“He is invested in what I am interested in, and he helped me decide what I wanted to do in grad school,” Jones says. “Don’t be afraid to talk to your professors—they know their classes and can tell you the best way to study. They don’t want you to fail; they are trying to help you grow and teach you how to learn new things.” He says those relationships come in handy when a student is trying to decide which graduate school to apply to or when they need a letter of recommendation.

During his sophomore year, Jones joined the Initiative for Maximizing Student Diversity (IMSD), a program that helps undergraduates pursue research opportunities. He’s now in the fellows portion of IMSD, which is geared toward students who plan to attend graduate school. If you can’t find Jones in the Leal lab, he might be relaxing near the Baja Café by Schurz and Hatch halls.

“It’s just a bench next to the grills, and there’s a giant tree that blooms with beautiful flowers,” he says. “I remember so many days I’d walk across campus just to sit there and study because it’s quiet and shady.”

Joshua shares shares why he thinks it’s important for incoming students to get to know their professors and why the research relationship is particularly important.

Joshua Jones from MizzouBiology on Vimeo.

Video and images by: Melody Kroll 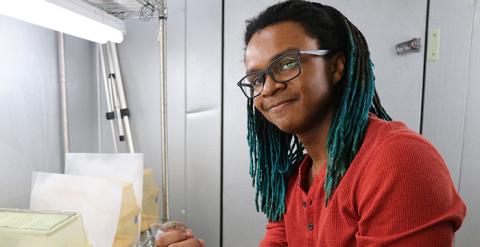