“Patricka is passionate about her research, she has demonstrated persistence in her pursuit of opportunities that have allowed her to develop as a scientist, and she deeply cares about ensuring that other people have similar opportunities to pursue their life goals,” says Hannink, who is a professor of biochemistry and director of MU’s Life Sciences Program.

By way of example, Hannink points to Mi-STEM, the social and professional networking organization for minority graduate students Williams-Simon founded shortly after starting her doctoral studies in 2015 and in the wake of racial tensions on the MU campus.

“The development of Mi-STEM and the strong support that this organization has amongst graduate students, faculty, and administrators speaks volumes about Patricka’s effective advocacy for diversity and inclusion in science on the MU campus,” Hannink says.

“Everything points to Patricka be a rising star and a leader in the sciences,” he adds.

Which is why Hannink says he nominated Williams-Simon for the Howard Hughes Medical Institute’s prestigious Gilliam Fellowship, which she was recently awarded. The Gilliam Fellowships for Advanced Study are awarded to exceptional doctoral students who have the potential to be leaders in their fields and who desire to advance diversity and inclusion in the sciences.

According to the HHMI, 231 individuals applied for the fellowship this year. Individuals had to be nominated by their universities to apply. Williams-Simon was one of 45 students to be selected. She is the only student in Missouri to receive the award this year and the first ever from the Columbia campus of the University of Missouri to be selected.

“Super-ecstatic” is how Williams-Simon says she felt upon learning that she was selected for the fellowship. “At the same time, I was humbled to be nominated and am honored to have been chosen.”

The Ph.D. candidate in the Division of Biological Sciences says the fellowship will allow her to dedicate more time to her doctoral research as well as strengthen her efforts to support her fellow graduate students on the MU campus.

Hannink notes that Williams-Simon is one of three former scholars of MU’s Post-baccalaureate Research Education Program (PREP) who are now Gilliam Fellows. Charles Washington with the University of Chicago also was awarded the fellowship this year and James Allen with Washington University in St. Louis was awarded the fellowship in 2016. The PREP program, directed by Dr. John David, Associate Professor in the Division of Biological Sciences, provides intensive research training to prepare students from underrepresented groups to succeed in competitive graduate studies programs in the biomedical sciences.

Hannink says these selections are a “win” for all of MU.

“This award is a prominent statement to our university community of the value of investing in diversity and inclusion and is a visible recognition that science works best in an environment that fosters such a culture,” he says. 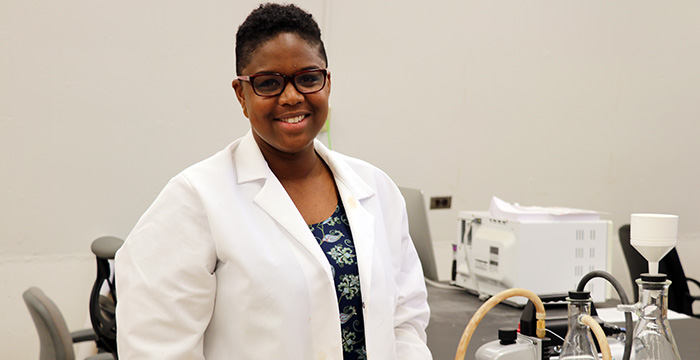 Williams-Simon says she cannot pinpoint when she first became interested in science.

“I’ve always just been curious about how the world works and the big ‘who, what, where, and why’ questions. In science, you ask those questions and try to answer them,” she says.

Williams-Simon, who grew up on the Caribbean island of Grenada, moved to New York to study biology, with an emphasis on neuroscience, at Medgar Evers College. In 2013, she moved to Columbia to do research as a scholar in the MU Post-baccalaureate Research Education Program (PREP). She worked in the lab of Chris Lorson, a professor of veterinary pathobiology and molecular microbiology and immunology.

“With Dr. Lorson, my research focused on developing a novel gene therapy for spinal muscular atrophy, a neurodegenerative disease that primarily affects children,” she says. “That experience gave me a different perspective on research and also exposed me to genetic research.”

Upon entering the graduate studies program in the Division of Biological Sciences, Williams-Simon joined the labs of Assistant Professor Elizabeth King and Professor Troy Zars. King and Zars invited Williams-Simon to work on a new collaborative project to uncover the genetic basis of learning and memory in fruit flies. The project, which was subsequently funded by the National Science Foundation, leverages King’s expertise in quantitative genetics as well a special population of fruit flies she helped develop and Zars’ expertise in learning and memory.

Plus, she adds, it’s a cool question.

“What are the natural genetic variants that are responsible for influencing learning, memory, and heat tolerance in fruit flies? That’s the big, overarching question of my research,” Williams-Simon says.

She explains that fruit flies have evolved physiological mechanisms to adapt to rapidly warming temperatures. As an ectotherm, a fly’s body temperature reflects that of its surroundings. At the same time, these animals also have adapted cognitive practices, such as learning and memory, which help them escape extreme temperatures.

“Although scientific evidence shows that learning, memory, and thermal tolerance have been subjected to natural selection as a means of adapting to warmer temperatures, studies examining these traits and how they relate genetically have not been done. With recent advances in genomic technology, it is now possible to tease apart regions of the genome that are influencing these complex phenotypes, which is what I’m trying to do,” Williams-Simon says.

Zars developed the experimental paradigm Williams-Simon used to measure variation in the three behavioral traits. He cites her handling of this part of the project, which required screening over 700 lines of flies, as an example of her scientific talents.

“Patricka demonstrated extraordinary ability to coordinate and complete the collection of this huge behavioral dataset,” he says.

“Patricka is a very talented scientist,” says King. “Having a student like Patricka who has been able to become an expert in both areas and bring them together has been a really powerful way to move the project forward.”

Both mentors heap praise on her ability to learn new techniques and approaches.

“Patricka has shown a tireless tenacity in learning and implementing new analytical methods to identify genetic mechanisms of learning and memory at a genome scale,” says Zars.

“When she started, one of Patricka’s goals was to become really good at computational approaches and programming and statistics, and she has done a great job at that. She is probably one of the most talented computational students in our graduate program in biology just through her own efforts and perseverance,” says King.

“And, with Libby’s help,” Williams-Simon quickly chimes in. “I have had an excellent teacher and mentor.”

Patricka standing in front of her research poster.
Patricka shares preliminary results from her research at MU’s Life Sciences Week.

And then quickly adds, courageous and very exuberant too. “Some people might think she is loud, but I say she is just the right volume! Her voice carries not only for her own fight, but for all the different groups who walk with her and embrace changes for a fair future.”

Cruz is one of 74 graduate students on campus who presently belong to Mi-STEM, the organization Williams-Simon formed in 2015. The native Brazilian says she enjoys being a part of the group because she can relax and be herself.

“I can be comfortable being myself, without trying to follow patterns or change my behaviors just to feel socially accepted on campus,” she says.

“Patricka has the ability to make everyone feel that they are of value, no matter the color of your skin, where you come from, your gender, or who you choose to love. Her main goal is to encourage everyone’s intellectual capacity,” she says.

Mi-STEM is very diverse on many levels. While ostensibly for graduate students in the STEM (science, technology, engineering, and mathematics) disciplines, Williams-Simon says they have members from the humanities as well. The organization is also broadly inclusive to all underrepresented individuals, including LGBTQ, students with disabilities, minorities, and international students.

Lacassidy Broadnax, a Ph.D. student in the Genetics Area Program, says the group’s diversity has helped her both personally and professionally.

“Attending meetings has exposed me to graduate students from different ethnic backgrounds, disciplines, and research interest. Being able to sit and talk with my fellow Mi-STEM members about life or science has enabled me to be more confident when I approach new people, which is a very important trait in the professional world,” she says.

Broadnax says she has also benefitted from interactions with Williams-Simon. “She is the ideal role model. She is self-disciplined. She is always pushing herself to be better-in all aspects of he life. This is a strong characteristic that distinguishes her from everyone else.”

King, who has observed Williams-Simon interact with graduate students and undergraduate students in all different environments, agrees. “Patricka is a model of how to treat people respectfully and to be open and to have a can-do attitude. She is everything I’d like to see in a mentee and in a future mentor.”

“What I admire most about Patricka is her perseverance. She does not give up on her goals and that includes her own personal goals and the broader goals she has for trying to be a person that contributes positively to the world,” she says.

After completing her Ph.D. at MU, Williams-Simon plans to pursue a postdoctoral academic position in the area of quantitative genetics. Beyond that, her goal for the future is to combine her passions for research, teaching, and mentoring by becoming a professor herself. 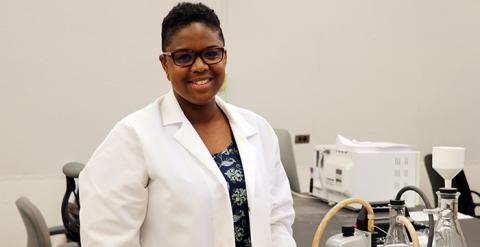