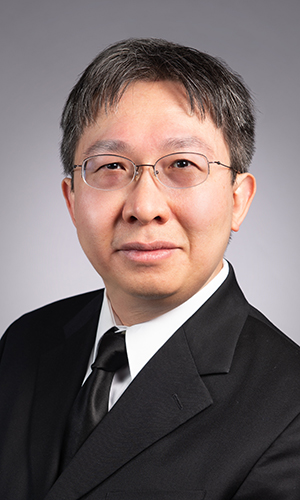 Meiotic silencing by unpaired DNA and sexual development in fungi 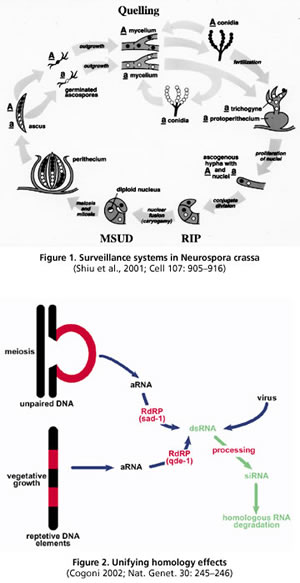 Our research interest is focused on gene regulation by post-transcription gene silencing system (PTGS). In the PTGS system, a transgenic aberrant RNA (aRNA) is converted into a double-stranded RNA (dsRNA) by the action of a RNA-directed RNA polymerase, and this dsRNA is cut into fragments of 21-23 nucleotides in length (small interfering or siRNA). These fragments act as guide RNAs for an ATP-dependent cleavage of homologous cytoplasmic mRNA. Recently, we have discovered a novel system of targeted gene silencing that operates after karyogamy, namely Meiotic Silencing by Unpaired DNA (MSUD). In the MSUD system, the diploid cell (zygote) scans the entire genome and compares the pairing of any DNA segment with its homolog during homologous pairing stage. DNA unpaired with a homologous sequence generates a sequence-specific signal. This signal destroys existing transcripts originating both from unpaired and paired DNA sequences homologous to it. MSUD requires the function of SAD-1, a RNA-directed RNA polymerase (RdRP). RdRP has been implicated in many PTGS systems, such as co-suppression in plants, RNA interference (RNAi) in animals and quelling in fungi.

Our data indicate that MSUD is a bona fide gene silencing system that is applicable to the entire genome. It is different from other RNAi systems in that it operates during meiosis and targets unpaired DNA for silencing. We have identified several loci that play a role in meiotic silencing. The finding that a suppressor of MSUD can confer fertility in otherwise barren interspecific crosses suggests that MSUD has important implications not only for surveillance against invading sequences but also for reproductive isolation and speciation.
Another aspect of our research interest is directed toward sexual development in fungi. It is very appealing to use Neurospora as a model organism for sexual development, since each phase in its sexual cycle is discrete and well-defined, and that mutants affecting individual step have been identified (with over 200 sexual mutants already isolated). We have demonstrated that meiotic silencing by an ectopic transgene can be a quick and easy tool for investigating the role of genes in meiosis and spore development, including genes for which a knockout construct would surely be lethal in vegetative life. With the recent completion of the Neurospora genome project, it would be relatively easy to identify genes that are required for meiosis and sexual development.

See Google Scholar for a list of Dr. Shiu's publications.