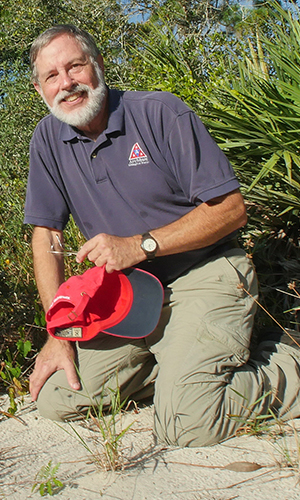 Biology and conservation of arthropods

Most of my research is done in native Florida scrub at the Archbold Biological Station, located at the southern terminus of the Lake Wales Ridge south of Lake Placid, Highlands County, FL. Florida scrub in general consists of a patchwork of ecosystems on ancient sand dunes that are dominated by shrubs adapted to nutrient-poor soils, wildfires, drought, and hurricanes. These are among the oldest and most restricted ecosystems in the world. Because of its unusually high degree of species endemism, Florida scrub is a globally important component of biodiversity. However, little is known about the many arthropods that are narrowly endemic to Florida scrub. We have documented that 76+ species of insects, millipedes, and spiders have their entire species distributions restricted largely to the Lake Wales Ridge, an strip that is approximately 10 miles wide and 120 miles long, running down the middle of peninsular Florida.

I am conducting long-term studies of burrowing wolf spiders and the red widow spider that are endemic to the scrub located on the Lake Wales Ridge in central Florida. I am gathering information about the distribution and abundance these spiders in habitats that naturally undergo burning every about decade and flooding every half-century of so.

I also am performing studies of the natural history of millipedes, spiders, and insects in the Florida scrub. For example, we have recently documented seasonal activity and feeding preferences in the rare scrub millipede, Floridobolus penneri. To our amazement, this giant millipede occurs predominantly in rosemary scrub, a open, barren habitat. This finding is the opposite of what we expected since most millipedes prefer mesic sites with leaf litter and rotting wood on the ground.

In October 2008 Dr. Mark Deyrup and I began a 3-year project at Archbold designed to survey specialized Florida scrub arthropods on protected lands (state, federal, private) on the Lake Wales Ridge. Our major goals are: accumulate information on potentially endangered species; demonstrate effectiveness of habitat acquisition for proactive protection on non-target species. Our methods are: trapping, observation, GIS correlation. Results: trap testing; background research on 70+ species; synoptic collection for identification; advertising for interns; setting up data bases. This project is funded by a grant from the Florida Dept. of Fish and Wildlife as part of the Florida Forever Project.

CASE/Carnegie Foundation Professor of the Year in Missouri 1999

See Google Scholar for a list of Dr. Carrel's publications.