Henderson was selected by the Society for Neuroscience (SfN) Professional Development Committee as a Neuroscience Scholars Program (NSP) Fellow. The highly competitive program provides up to 18 neuroscience trainees from around the country with career development and networking opportunities aimed at furthering their future success in the field of neuroscience.

As an NSP Fellow, Henderson will be paired with a mentoring team consisting of a senior mentor and a peer mentor with whom she can discuss her research, career plans, and overall experience.  She also will receive two years of complimentary SfN membership, a travel award to attend the SfN annual meeting for two years, and enrichment funds of up to $1,500 to support additional professional development activities for two years.

Henderson also received the 2021 Ethel Sue Lumb Award. This endowed departmental award, which comes with a $2000 prize, is given to one graduate student per year who has demonstrated exceptional promise in research and scholarly activities and demonstrates financial need. Henderson was recognized both for her work on the impacts of multiple sclerosis on the autonomic nervous system and for her many contributions to the community both within the department and beyond in Columbia.

Henderson’s doctoral research is focused on the “downstream” effects that multiple sclerosis (MS) has on the properties of nerve cells (neurons) that supply the bladder. While MS is a neurological condition that affects the central nervous system, it can disturb other parts of the nervous system by disrupting the electrical signals that pass messages along the nerves. People with MS often develop bladder control problems, indicating disruption to their autonomic nervous system (ANS). The ANS controls bodily processes like breathing, heartbeat, digestion, and bladder function. Henderson is using a combination of urodynamic, imaging, electrophysiological, and molecular techniques to study the physiological properties of neurons that supply the bladder in mice with experimental autoimmune encephalomyelitis, a model disease that closely resembles MS. Henderson is carrying out the research in the lab of Dr. David Schulz.

“Bladder dysfunction is a widespread but often overlooked impact of diseases like multiple sclerosis. Sherryl’s work provides the fundamental understanding of such impacts that will allow for development of new therapies for this underappreciated but debilitating aspect of MS,” said Schulz.

In addition to her research, Henderson is a passionate social justice advocate. She participates in organizations and activities that promote and support equity and anti-racist practices locally and nationally, including People’s Defense, Black Lives Matters, and Race Matters, Friends. She also has been integral to anti-racist discussions and activities within the Division over the past year.

“It is impossible to thank Sherryl enough for all that she has done for the Division,” said Professor Manuel Leal, Director of Graduate Studies. “She has been one of the voices of our Black students who has candidly shared the difficulties she has faced and how we can take action to improve our community. Through her quiet but commanding example she has compelled us to take a closer look at how we -- as individuals, a department, and scientists – can better foster a more inclusive scientific and academic community for people of color and LGBTQ individuals. Muchas gracias, Sherryl.” 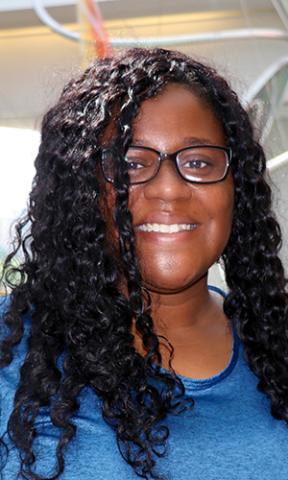