Lewis J. Stadler was a pioneer in the field of genetics and was the intellectual founder of MU’s plant genetics tradition. He co-discovered that X-rays cause genetic changes and provided many early insights into the nature of genes. His stature in the genetics research community brought other distinguished colleagues to MU. He was a member of the National Academy of Sciences, the American Philosophical Society, and the American Academy of Arts and Sciences.

In his honor, for years the University of Missouri hosted a genetics symposium in his name. The Stadler Genetics Symposia were hosted annually from 1969 to 1983 and then every other year until 2008. The symposia brought to campus many of the giants in the field of genetics, including A. H. Sturtevant, G. W. Beadle, Lynn Margulis, Barbara McClintock, George P. Redei, Ernest R. Sears, and George P. Smith. More than a few of the speakers were future recipients of the Nobel Prize and the Wolf Prize, among others.

The proceedings from these symposia, along with photos from the meetings, were compiled in a collection of books edited by Arabidopsis geneticist George P. Redei (1969-1982) and by wheat geneticist J. Perry Gustafson (1982-2008) and published by the University of Missouri and later by Springer.

The proceedings from the 1969 through 1983 Stadler Genetics Symposia, which were published by the University of Missouri, are now available digitally on MOspace.

The collection can be accessed at the following link: https://mospace.umsystem.edu/xmlui/handle/10355/66509 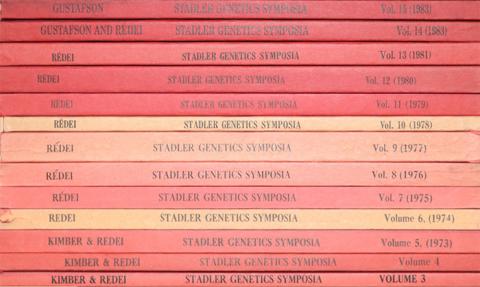