According to Paula McSteen’s students, it’s the personal touch that sets her apart as an instructor worthy of the 2019 Research Mentor of the Year Award. Having mentored 29 students since arriving at MU in 2010, McSteen has many grateful mentees.

“She always asked what I was involved in, and she would take careful notes on what I have going on outside of the lab and class,” wrote Zayd Al Rawi in a nomination letter for his mentor. “She always makes sure that I have everything I need to be successful.”

Ethan Zars attributes his Goldwater honorable mention to the scientific rigor he learned from working alongside McSteen in the lab.

“That’s one of the great things about Dr. McSteen as an advisor — she doesn’t just tell students how to do things,” Zars says. “She explains the science behind the technique so you understand what is going on.”

One of her former students, Dennis Zhu, writes that Paula is “an incredible mentor as a scientist and for life in general. In meetings with her, Paula will ask not only about science but also about school and other day-to-day topics. These conversations gave me the sense that Paula genuinely cares about my well-being and helped us build a real friendship over the years.” 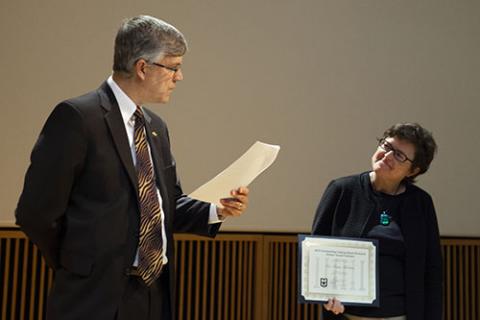