Birchler, who is a Curators' Distinguished Professor of Biological Sciences, was honored during an online ceremony on March 11, 2021, as part of the 63rd Annual Maize Genetics Meeting.

During the ceremony, Birchler was conferred the Barbara McClintock Prize for Plant Genetics and Genome Studies, an honor he received in 2020 but which was delayed due to COVID. Established by the Maize Genetics Executive Committee, the prize memorializes McClintock’s scientific contributions by honoring the discoveries of the world’s leading plant geneticists.

Fellow Mizzou biologist and maize geneticist David Braun hosted the ceremony and presented the prize to Birchler. While Birchler received the award in recognition of his scientific discoveries in genetics, Braun focused on some lesser-known details about the famous maize geneticist – like the entire separate body of genetics work he has done on fruit flies, his penchant for genetic heroes/heroines, including McClintock, and his annual depictions of both the father of genetics, Gregor Mendel, and father Christmas.

“Jim doesn’t need much of an intro to the maize community, so I really wanted to showcase his excellence as a human being and colleague by sharing some facts about him that not everyone is aware of,” said Braun.

Another fact not widely known is Birchler’s impulse to commemorate various people and occasions by writing fun and lively verses. This ceremony was no exception. When accepting the prize, Birchler paid tribute to McClintock by reading the following poem he penned in her honor.

Then in 19 hundred ‘n eighty three
To maize folks, no surprise
She got the call from Stockholm
That she won the Nobel Prize.

Birchler was recognized for his studies of gene expression at the gene and chromosome levels in both corn and fruit flies. His research has been at the forefront of understanding how dosage, or copies, of genes work together and sometimes fail. Together with Reiner Veitia (University of Paris), Birchler proposed the Gene Balance Hypothesis, which posits selection on proteins involved in regulation in response to changes in dosage. His research also has provided novel insights into several of McClintock’s own discoveries, including the breakage-fusion-bridge cycle, a phenomenon that can occur during cell division that leads to chromosomal instability. 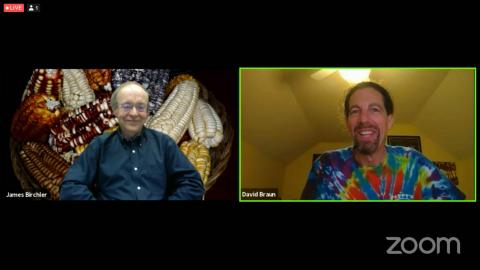