The Division congratulates Professor Emeritus John Faaborg on receipt of a Lifetime Achievement Award from BirdsCaribbean. The award was announced earlier this month at the 2022 Ornithological Conference in San Juan, Puerto Rico.

According to BirdsCaribbean, “This consistent, long-term mist-netting project has resulted in several important publications by Dr. Faaborg and his students, including documenting the decline in winter resident Nearctic-Neotropical migrant birds well before such declines were demonstrated elsewhere. Results have also shown the effects of droughts, hurricanes, and early winter rainfall on resident and migrant annual survival and recruitment. The team’s work was also the first to demonstrate the decline of the endemic Puerto Rican Vireo in the dry forest while also documenting the colonization of the dry forest by Shiny Cowbirds and Caribbean Elaenias. These publications have repeatedly demonstrated the value of long-term monitoring of bird populations.”

Dr. Faaborg, who joined the faculty in 1975, authored/coauthored over 130 scientific articles in top scientific journals plus 3 ornithology textbooks. Thirty-one of his publications are on Guánica avifauna, and results from the long-term dataset have been used in over 100 peer-reviewed publications. 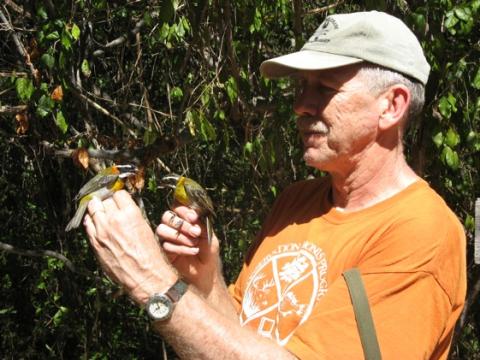