“Troy’s death is a heartbreaking loss for everyone in the Division of Biological Sciences,” said John C. Walker, Curators’ Distinguished Professor and Director of the Division of Biological Sciences. “He was a distinguished and respected faculty member of our department and integral to the MU neuroscience research community. He will be remembered as an extremely creative scientist, a wonderful and supportive colleague, a dedicated mentor and teacher, and a kind human being. He will be missed tremendously.”

Troy Daniel Zars received his bachelor’s degree in biology from Luther College, a liberal arts college in Decorah, Iowa. He then moved to the University of Northern Iowa, where he completed a master’s degree in biology. In 1996, he earned a Ph.D. in biology from the University of Notre Dame in South Bend, Indiana. He did his doctoral work with Dr. David Hyde on the genetics of retinal degeneration in the fruit fly (Drosophila melanogaster). He was awarded a prestigious Humboldt Research Fellowship, which took him to Germany to work with Martin Heisenberg in the Department of Genetics and Neurobiology at the University of Würzburg, Germany. For his postdoctoral work, he developed a neural systems approach in memory formation using Drosophila. In 2002, he moved back to the United States to join the faculty in the Division of Biological Sciences at the University of Missouri, where he rose to the rank of Professor in 2017.

Zars’ research was in the area of neurobiology of learning and memory. He was specifically interested in examining mechanisms of memory formation in multiple contexts. He used the fruit fly, Drosophila melanogaster, as a model system and took advantage of molecular, genetic, neural systems, behavioral, and physiological approaches to understand how the fly brain learns and stores information. He characterized his lab’s unique contribution to the field as “based on moving back and forth between classical (i.e., Pavlov) and operant (i.e., Skinner) paradigms to test for conservation of function for genes and neural circuits in both types of learning.” His lab was well known for its use of an elegant “place memory” paradigm using a heat box system, which he coupled with sophisticated genetic approaches to map the location of short-term memory in precise neuronal circuits. He and his group published over 40 papers; many appeared in highly prestigious journals. Zars also authored several influential reviews of his field. His research ideas were supported by grants from the National Science Foundation, the National Institutes of Health, and the Howard Hughes Medical Institute. Zars was widely regarded as an extremely creative and thoughtful scientist, who was always pushing the boundaries of technological approaches to bring previously difficult questions into the realm of the possible. Every year, he usually was asked to review many grants and papers, and he wrote commentaries for several of the papers he reviewed. His contributions to his field are unquestioned and are reflected in his outstanding international reputation.

Zars was integral to MU’s neuroscience research community. He was an active member of the campus-wide Interdisciplinary Neuroscience Program and served on its executive committee for 12 years. He also was a core faculty member of the Neural Circuits and Behavior Group. He organized and taught graduate courses on cellular and systems neurobiology as well as a neurobiology journal club. Additionally, he co-founded and co-organized a highly successful bi-weekly neuroscience research seminar series, which was used to invite advanced post-doctoral fellows from some of the best neuroscience labs in the country to talk about their work. His commitment to neuroscience education and research extended beyond the MU campus. He participated in outreach activities aimed at encouraging young people to consider careers in neuroscience. He also co-founded and organized the Gateway Behavioral Neuroscience Conference, which brought together Drosophila investigators from four universities across the Midwest.

Zars was very supportive of his colleagues and the Division of Biological Sciences. He served on the Division’s Personnel Committee and Divisional Council as well as the Division’s Graduate Education and Graduate Recruitment committees. He also served as a Faculty Fellow for the Office of the Provost and as a member of the MU Research Council.

Zars was especially beloved as a mentor and teacher. He trained 4 postdoctoral fellows, 9 graduate students (7 Ph.D. students), and 22 undergraduate research students in his lab. He served on an additional 30 dissertation and thesis committees. His mentoring style reflected his own approach to science: he encouraged his students to develop their own research projects but also to actively seek out ways to collaborate with one another or with postdoctoral fellows on each other’s projects. The collaborative environment he engendered in his lab is reflected in many papers with multiple graduate students and postdoctoral fellows as co-authors. In addition to the graduate neuroscience courses, Zars taught a cell biology course for majors every year. Students characterized him as a personable, approachable, engaging and soft-spoken teacher who was excited about the material and genuinely cared about their learning.
Troy with three students 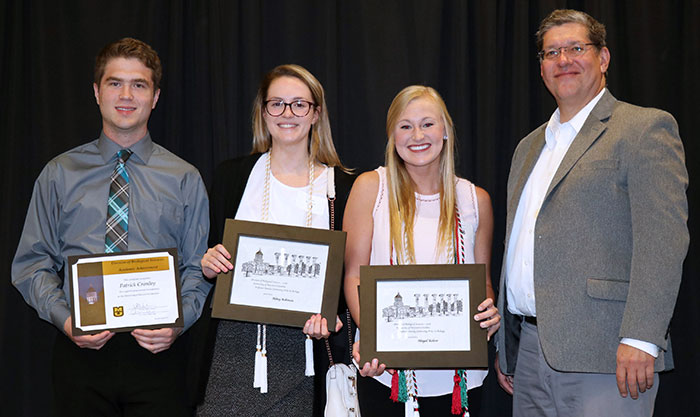 Troy celebrating the accomplishments of three of his undergraduate research students. 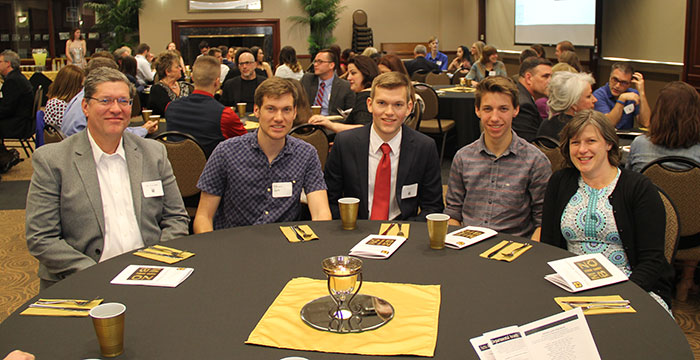 Troy with his sons and wife, Melissa, at the Division’s 2018 Honors Banquet, at which his son, Benjamin (middle), received an award.

“Troy was the first person I would call if I needed any advice whatsoever, whether it was input on an experiment, an idea to incorporate into my classroom, or whether a direction the department was taking was a good one,” shared David Schulz, a Professor in the Division of Biological Sciences. “He had an uncanny insight into all aspects of what it meant to be a colleague, scholar, scientist, and all around decent human being. What I most appreciated about Troy as a colleague was that I knew I could ask him anything, or propose any off-the-wall idea, and get honest, meaningful feedback without ever being made to feel inferior or having to first wade through being told how smart he was before he’d share with me his insight. He was an unusual academic – equally at home in the research lab, the classroom, or in the woods or on a lake. But more importantly, he was an extraordinary person – quick to laugh, slow to judge, and eager to help.”

“One of the things I admired most about Troy was his enthusiasm and excitement for all science,” shared Elizabeth King, Assistant Professor of Biological Sciences. “He was someone who really understood the inherent value of science as a way to understand the world, and he had an appreciation for any and all science that helped move us toward that goal. Because of that attitude, he was someone who was incredibly supportive, someone who could recognize the value in the work all of his collaborators and colleagues were doing. He was the kind of colleague who made you feel valued, who lifted people up rather than tearing them down. That quality, along with his creativity, curiosity, and his willingness to translate enthusiasm for science into hard work, meant that a lot of projects got started that would not have without his influence. He approached me about collaborating very soon after I started my position at Mizzou. He had an infectious enthusiasm that made me eager to start a project with him. Because of his leadership, we were able to start a successful research direction that allowed us to combine our different backgrounds and expertise. We secured funding for this project and now have two students we have co-mentored working on it. Collaborating with Troy has been fun and exciting, and I’ve learned so much from him. My science is better, I am a better mentor, and I am a better collaborator because of Troy’s mentorship.”

“Not many people could say that their Ph.D. adviser was their friend, but I can! Troy always had my back,” shared Patricka Williams-Simon, a fourth-year Ph.D. student who was co-advised by Zars. “Whenever I entered his office, Troy would drop whatever he was doing, step from behind his desk, invite me to sit, and then say, ‘What’s up?’ He always emphasized that his graduate students are his colleagues, and that he was not our boss. He made it clear we worked with him and not for him. He believed that graduate school is a training and not a job, and that it was his responsibility as the PI to give his students the tools to become independent scientists, and he did just that. He was very passionate about science. Science got him excited. He loved chatting about science, which we did often. He always encouraged me to become a well-rounded scientist, by pushing me to think outside of the box. When I asked a question, he would always follow up with a question and then another question and then another question. He was always pushing me to my limit. Those discussions trained me to become a critical scientific thinker.” 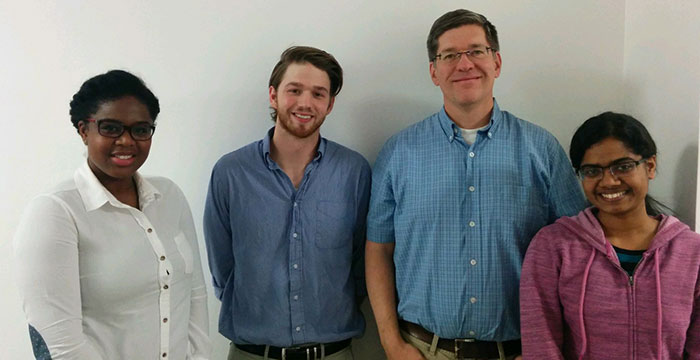 “Troy was the most inspirational person I have ever met. He was a friend and a mentor, rolled into one,” wrote Aditi Mishra, who joined the Zars lab as a graduate student in 2015. “Troy cared a lot about my career, and he involved me in whatever activity he thought would help. But, he also pushed me to explore and have a life outside the lab. Once, he sat down next to me and advised me to stop working so much and to go to more barbeques! He reinforced that research is way of life and not just a job, and that meant a lot to me.”

“Troy was an amazing friend and colleague,” wrote David Braun, Professor of Biological Sciences. “He poured himself into everything he did, yet he always had time for his students, colleagues, family, and friends. He united people around him, whether at work behind a common goal, or through barbequing and hosting a party (he was a crack horseshoe thrower). He advocated passionately for what he believed in, in his soft-spoken, kind, and good-hearted manner. He was a terrific scientist and dedicated faculty member, teacher, mentor, and citizen. He was an even greater friend. However, he was first and foremost a loving family man. I miss him dearly.”

At times like this, we are reminded that a department such as ours is truly a family. As Dr. Schulz said, “To say he will be missed is an understatement of the highest order.” 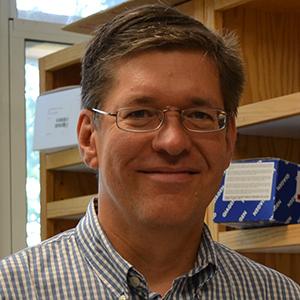