Congratulations to our new PhDs! 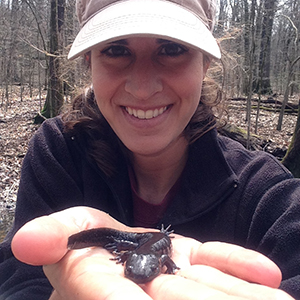 Arianne Messerman studied the factors that influence survival rates in the lesser-studied terrestrial life stage of pond-breeding salamanders in the genus Ambystoma. She conducted a capture-mark-recapture study of three species to estimate juvenile survival rates and then performed a replicated experiment with five species to evaluate various physiological characteristics that contribute to survival, including an ability to resist water loss. Her findings, which will appear in four forthcoming peer-reviewed publications, will inform population models to guide conservation efforts.

Messerman’s research was supported by a Life Sciences Fellowship from the University of Missouri, a Trans World Airline Scholarship, and a Grant-in-Aid of Research from Sigma Xi. In 2018, the Society for the Study of Amphibians and Reptiles honored her research accomplishments with both its Henri Seibert Award and Dean Metter Memorial Award. In 2017, the Division selected her for its Ethel Sue Lumb Award, which recognizes excellence in research by a graduate student.

Messerman, who joined the graduate program in biological sciences in 2014, was attracted to Mizzou by the work of Professor Ray Semlitsch. Dr. Semlitsch was a renowned herpetologist and amphibian ecologist known for his work on the ecological connection between aquatic and terrestrial salamander habitat. For his part, Dr. Semlitsch was excited to have recruited Messerman to his lab. In a letter supporting her application for a research grant, he called Messerman a “rare find for a Ph.D. program, having both a strong conceptual and theoretical background in ecology coupled with practical knowledge of natural resource management.” He further predicted she would be “a leader in his lab group, a go-to person.” When Dr. Semlitsch died unexpectedly in June 2015, Messerman continued her studies under the supervision of Dr. Manuel Leal. Leal, who described her work as “integrative and forward-looking.” “She designed elegant experiments, informed by her intimate understanding of the natural history of ambystomatid salamanders, to illuminate factors affecting the survival of individuals at the ‘invisible’ juvenile stage.” He also praised her leadership qualities, especially her commitment to inclusion, diversity, and equity.

Dr. Messerman will be joining the lab of Dr. Christopher A. Searcy at the University of Miami as a postdoctoral associate in January 2020. She will continue investigating the population dynamics of pond-breeding salamanders, focusing on juvenile recruitment. In addition, she will conduct field studies on the federally endangered Santa Cruz long-toed salamander. Her goal is to continue doing research that benefits amphibian conservation efforts. 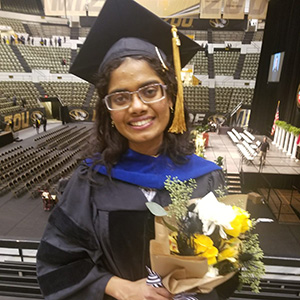 Dissertation title: Identification, Characterization, and Use of Novel Thermogenetic Tools in Drosophila melanogaster

Aditi Mishra’s graduate work involved using a combination of molecular, genetic, and behavioral approaches to study special temperature-activated proteins that are useful for studying specific cellular functions, including neurons. She and her colleagues identified and characterized several proteins, including like GR28bD, from various species of fruit flies that are temperature responsive over broad range of temperatures (32-40°C) and are structurally different from previously known temperature sensors (Scientific Reports 2018). As proof of concept, she used GR28bD to study the role of dopamingergic neurons in place learning and memory in flies (manuscript in revision). The research was supported by a grant from the National Science Foundation (to TZ).

Mishra, who joined the graduate program in biological sciences in 2015, was attracted to Mizzou by the work of Professor Troy Zars. Dr. Zars was a renowned neurobiologist, known for his pioneering work in the area of the neurobiology of learning and memory. For his part, Dr. Zars was enthusiastic to recruit Mishra to his lab. In a letter supporting her nomination for an award in 2018, Dr. Zars described her as “a highly motivated exceptional graduate student,” “self-driven and committed,” “creative about her work,” and “an all-around great person and an asset to the teaching and research community.” When Dr. Zars died unexpectedly later that year, Professor David Schulz became Mishra’s primary advisor. He praised Mishra’s research skills. “Her work fundamentally changed the way we think about the role of a critical neurotransmitter, dopamine, in place learning and memory. Not only was she able to make this bold contribution to the field, but she played a pivotal role in the development of a novel set of genetic tools to manipulate neuron activity. She is a talented scientist, and graduates as an independent thinker who took hold of a research project – maybe better described as a research ‘enterprise’ – and made it her own.” Dr. Schulz confidently predicts that this will not be the last we hear of Mishra or her work.

Dr. Mishra will be joining the lab of Dr. Scott Waddell in the Center for Neural Circuits and Behavior at the University of Oxford, UK. She will continue investigating the underlying mechanisms of learning and memory in Drosophila, focusing on the biogenic amine systems. 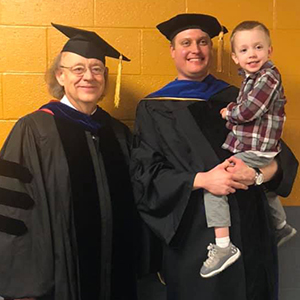 Dissertation title: Development of an Amenable System for Site-Specific Addition to a Maize Chromosome

Nathan Swyers graduate work focused on the development of a gene targeting procedure that will allow stacking of multiple genes at a predetermined site in the maize genome. Swyers built the target site and recovered multiple transformation events of it, including one on the supernumerary B chromosome of maize. He then built transformation constructs that could be added to the target site with site specific recombinase enzymes. He and his colleagues in the lab recovered a collection of such recombinases that can be used for genetic engineering and in particular for targeted transformation. Nathan showed in a proof of concept that the targeting works and sequence verified the insertion. He has nine publications, including a first author paper in Current Protocols in Plant Biology. Swyers’ research was supported by grants from the National Science Foundation (to JB).

Swyers was the recipient of three travel grants, from the John D. Bies International Travel Scholarship Fund and the Douglas D. Randall Young Scientists Development Fund. He was a fellow and mentor of MU’s Preparing Tomorrow’s Leaders in Science program (2015-2017).

Swyers completed his undergraduate degree in biological sciences at Mizzou in 2011. As an undergraduate, he took a general genetics course with Dr. Jim Birchler and then subsequently approached Dr. Birchler about doing research in his lab. Swyers stayed on in the lab as a technician after he graduated and then joined the lab full time as a graduate student in 2012.

Dr. Swyers will be staying on in the lab of Dr. James Birchler at MU as a postdoctoral fellow, where he will continue working on recovering and inherited insertion event and then testing for secondary stacking of subsequent transgenes at the same site. 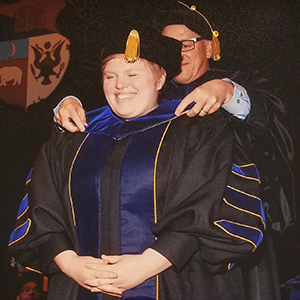 Dissertation title: Phylogenomics of Orchids and their Mycorrhizal Fungi: Trees, Diversity, and the Pursuit of Symbiosis

Sarah Unruh studied the genomes of fungi that allow orchid seeds to germinate. Unlike most other plant seeds, orchid seeds lack cotyledons and endosperm so rely on fungi to acquire the nutrition they need to germinate and develop. Unruh sequenced a rich collection of fungi isolated from orchid roots and seedlings to shed light on the evolutionary history and genome architecture of these orchid fungal symbionts (bioRxiv 2019). In a related study, she used next generation genomic methods to study the evolution of slipper orchids (Cypripedioideae) in an effort to shed light on the evolution of this morphologically distinct orchid subfamily (American Journal of Botany 2018). Studying the DNA sequences of orchids and their associated fungi have implications for conservation efforts. Unruh’s research was supported by funding from a National Science Foundation (NSF) Graduate Research Fellowship and a grant from the Joint Genome Institute.

Unruh completed her bachelor’s degree in biological sciences from MU in May of 2013. She chose to pursue her Ph.D. with Dr. Chris Pires after taking his class in plant systematics as a junior. In a story that appeared in the Maneater, Dr. Pires shared that “Unruh was a dedicated student then and a self-motivated researcher now.” He also praised her individuality and independence: “The first thing I would say in any letter of recommendation for Sarah is that she’s an independent investigator.”

Dr. Unruh will be joining the faculty in the Department of Biology at Illinois College as an Assistant Professor in January 2020, where she will teach and continue to investigate the relationship between orchids and their mycorrhizal fungi. 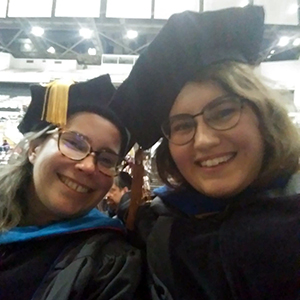 Michelle Williams identified a key protein involved in polar elongation in the bacterium A. tumefaciens. Many well-studied rod-shaped bacteria elongate by the lateral insertion of newly synthesized peptidoglycan along their sidewalls using a well-defined elongasome complex. In contrast, bacteria in the order Rhizobiales exhibit polar elongation, whereby peptidoglycan is targeted to a single pole. Williams showed that an essential bifunctional Penicillin-Binding Protein (PBP1a) is the major synthase required for this polar peptidoglycan insertion. She demonstrated that cells depleted of PBP1a get shorter due to a loss of polar growth and that its depletion causes changes in peptidoglycan composition that suggested alterations to the activity of enzymes, called LD-transpeptidase (LDT), implicated in cell wall remodeling. She purified one of these LDTs and identified faropenem as an antibiotic inhibitor of the enzyme. Using cell wall enzyme targeting antibiotics and deletion mutants, she further showed that similar features of the cell wall machinery, such as an essential PBP1a and sub-polar LDTs, underlie the unique mechanism of polar growth in Rhizobiales, Sinorhizobium and Brucella.

Williams research was funded by a grant from the National Science Foundation (to PB) as well as a Life Sciences Fellowship. Williams also secured a $20K research grant from MU’s DNA Core as well as seven travel grants. She received 1st place for an oral presentation of her research at the Missouri Branch of the American Society for Microbiology in 2016 and 2nd place for a poster presentation at the Cell Biology of Prokaryotes Conference in Bad Staffelstein, Germany, in 2019. In 2018, the Division selected her for its Ethel Sue Lumb Award, which recognizes excellence in research by a graduate student.

Williams joined the graduate studies program in biological sciences at Mizzou in 2014. She said she was attracted to the Division’s friendly and supportive graduate student culture and to Dr. Brown’s research on how diverse bacteria grow and divide. She described Dr. Brown as “an amazing mentor not only in my academic pursuits but also for my career and personal life!”

Dr. Williams will be joining the lab of Dr. Marie Elliot at McMaster University as a postdoctoral fellow in January 2020. She will be investigating mechanisms of exploratory growth in the Actinobacteria.