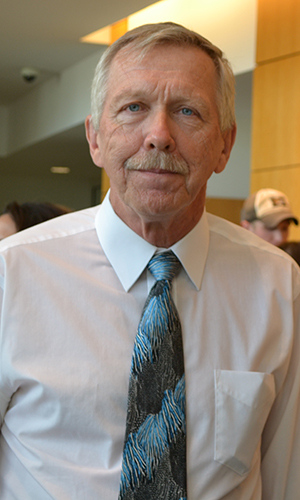 My students and I work on various aspects of the ecology of birds. Much of this work can be classified as “island biogeography,” although the islands may be stands of oak within a sea of Missouri farmland. Nearly all of this work involves how bird populations respond to variations in habitats that occur over both time and space.

I have been monitoring bird populations in the Guánica Forest of Puerto Rico since 1972. Although our original focus was on how resident birds responded to drought conditions, much of our recent effort has been on patterns of abundance and survival in winter resident birds (species which winter in this forest but breed in North America). Using stable isotope analysis, we have shown that most of our wintering birds breed in the eastern United States. We find that populations and survival are best explained by patterns of rainfall on the wintering grounds for some species, but on the breeding grounds for others. Most resident species had high populations just before Hurricane George damaged the forest; these populations have been in steady decline since. Our current efforts are to understand the relationships between resident populations and survival and the local rainfall patterns.

Our work in the Midwest has primarily focused on Neotropical migrants during the breeding season. Studying both forest and grassland systems in most upper Midwest states, we have found several levels of “area-sensitivity” as habitat patches become small and/or isolated from one another. Conversely, a long-term experiment on forest management in the Ozarks (the Missouri Ozark Forest Ecosystem Project, or MOFEP) shows that cutting forests in a heavily forested landscape has relatively limited negative effects on forest birds but may provide high quality habitat for second-growth species, particularly in clearcut sites. Recent spatial analyses show that some species actually prefer mature forest next to a clearing over large expanses of old-growth forest.

Students in the Avian Ecology Laboratory are often involved in these or related projects, but many students also do independent work on similar topics. Recent graduates have done studies on obligate ant-following birds in Peru, riparian bird communities in California, grassland birds and global climate change, patterns of altitudinal migration in Peru, or endangered species in Texas. Current students are examining winter resident abundance in Mexico, habitat selection in Bell's Vireos, and the interaction between snakes and nesting birds.

Fellow, American Association for the Advancement of Science 2001

Governor’s Award for Excellence in Teaching 1992

See Google Scholar for a list of Dr. Faaborg's publications.