Selfish DNA elements are found in almost all organisms. These elements, such as retrotransposons, pose a significant risk to the integrity of the genome and health of the organism that they inhabit. As they proliferate, new copies may insert themselves into genes, causing severe mutations. For the filamentous orange bread mold, Neurospora crassa, the lack of complete cross walls between cells increases the risk of these repetitive elements spreading. Accordingly, several genome surveillance mechanisms are maintained to help the fungus combat these repetitive elements. One of these defense mechanisms is known as meiotic silencing by unpaired DNA (MSUD), which is an RNA silencing system that identifies and silences unpaired genes during meiosis. Homologous chromosomes share similar sequences between them and are paired at the beginning of meiosis, so any sequence found on only one of the chromosomes and not the other is a possible sign of invasion.

Once the unpaired sequence has been identified, a signaling molecule, most likely a single stranded aberrant RNA (aRNA), is produced from the sequence and used by a host of MSUD proteins in the region surrounding the nucleus to create short interfering RNAs (siRNAs). These siRNAs will direct the degradation of mRNAs from any sequence that shares homology with the original unpaired DNA. These steps should prevent the spread of repetitive elements during meiosis (a prime time for them to jump to new chromosomes).

Through our work, we have identified cellular components important for normal RNA processing to also be involved in MSUD. Almost all RNAs must be processed, transported, and eventually degraded. An mRNA, directing the creation of proteins, is capped, spliced and exported from the nucleus. The assembled proteins on the cap, known as the cap binding complex (CBC), is critical for MSUD. A strong mediator of MSUD, SAD-8, is a CBC associated protein and may be recruited to the CBC by another MSUD-mediating protein called ARS2. The CBC interacts with the Argonaute protein, which destroys mRNAs using siRNAs as its guides. We hypothesize that the CBC helps Argonaute more efficiently capture mRNAs as they exit from the nucleus, and those homologous to the siRNA guides will be degraded.

Cytoplasmic bodies called processing bodies (P-bodies) are cytoplasmic granules associated with the regulation of RNA translation, storage, and degradation. We have visualized P-bodies in the spore sacs of N. crassa and found two P-body proteins (CAR-1 and CGH-1) to be involved in MSUD. These proteins interact with several MSUD proteins, including the Argonaute protein. This is the first time MSUD has been linked to RNA granule proteins.

Michael has accepted a teaching position at Moberly Area Community College. He will be teaching general biology, plant biology, microbiology, and other courses to undergraduate students. 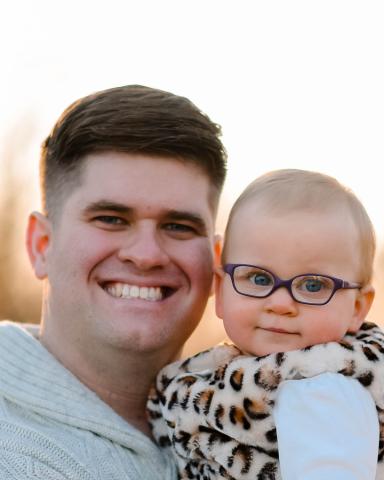