Breeding the unbreedable: assisted reproduction in the cheetah

The Species Survival Plan of the Association of Zoos and Aquariums cheetah population consists of approximately 320 individuals, with ~28% of these animals removed from the breeding matrix for either age or health reasons or because they are fulltime members of ambassador animal programs.  Cheetahs have a history of complex and poor reproduction ex situ.  Males of this species produce high levels (~75%) of malformed sperm on average yet have a long reproductive lifespan from 2-12y of age.  Females have a shorter reproductive lifespan with 80% of first litters being produced in females that are 3-7y of age.  Females also demonstrate irregular and unpredictable estrous cycles, making timing of exogenous gonadotropins (eCG and LH) used for assisted breeding difficult.  Approximately 35% of females have no increase in estradiol following eCG injection and no or poor increase in progestogens following LH injection.  These females are termed ‘non responders’.  Success following artificial insemination has been variable with 11 of 55 (~20%) of females inseminated 1990 – 2018 producing cubs, but with the last pregnancy occurring in 2003.  An investigation of ovarian function and gamete quality in females 2 – 13y of age revealed that although fewer follicles were developed and fewer oocytes were recovered in the oldest females (≥ 9y old) compared with either the youngest (2 – 5y old) or adult (6 – 8y old) females, gamete quality (Grade) and fertilizing ability in vitro were comparable across age groups.  The oldest cheetah females did, however, have 87% incidence of uterine hyperplasia with 56% of these females having severe pathologies (hydrometra, pyometra, fibroids, adenomyosis).  Pathologies were prevalent in females as young as 6 y.  The ability to generate embryos from oocytes harvested from older, genetically valuable females followed by transfer to younger surrogates enables reproduction of cheetahs that otherwise would not genetically contribute to the population.  From 2019-2022, our group has conducted this combination of gamete harvesting, followed by in vitro fertilization and subsequent transfer, on seven paired cheetah females.  All sperm samples used for in vitro fertilization were cryopreserved, enabling us to maximize the genetic diversity of the embryos.  All donor females (ages 6 – 11y) produced ovarian follicles in response to eCG and LH treatment and an average of 13.9 oocytes (range, 7-18) were recovered per female.  Six of the seven (86%) recipients had fresh corpora lutea on their ovaries at the time of transfer, indicating good overall response to the exogenous hormones for this cohort.  Pregnancy was established in one 3y old recipient that had received 10 embryos two days following in vitro fertilization, and two healthy cubs were born naturally following a normal gestation period.  Genetic evaluation of the sperm donor, oocyte donor and recipient (surrogate) revealed that the cubs were in fact produced by the donor cheetahs, and they were not related to the recipient.  The combination of oocyte recovery, in vitro fertilization and embryo transfer enables the reproduction of male and female cheetahs that otherwise would not contribute genetically or demographically to the population. 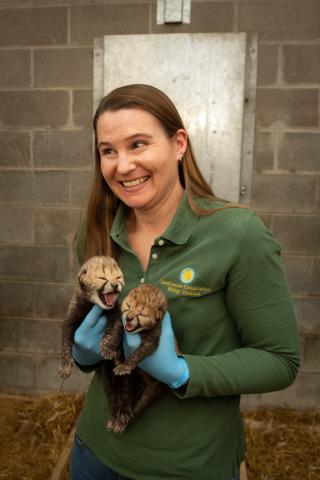