Grasses are classified by the production of florets in small branches called “spikelets”, which maize produces in pairs, one pedicellate and one sessile. Spikelets and all other plant organs are produces by small pools of stem-cells called meristems. The ability of meristems to divide to produce cells to replenish the stem-cell pool and divide to produce cells that will differentiate into organs is called meristem maintenance.

Sos2 heterozygous plants display a wide verity of phenotypes, which suggests that the underlying mutation is influenced by both genetic and environmental modifiers. Genetic analysis of field grown plants indicated that this variation is a result of a semi-dominant mutation together with a recessive epistatic enhancer. Moreover, growth chamber experiments, showed that higher temperatures suppressed the mutant phenotype.

Genetic studies were done with Sos2 and known meristem maintenance mutants in the maize CLAVATA pathway, fasciated ear2 (fea2), thick tassel dwarf1 (td1), and compact plant2 (ct2). This analysis provided genetic evidence that Sos2 functions in the CLV-WUS meristem maintenance pathway. This study was complimented by RNA-seq analysis, which showed a significant decrease in the expression of the homeodomain transcription factor, ZmWUSCHEL1, which functions in stem cells. Furthermore, other differentially expressed genes (DEGs) in this data set allow for the hypothesis that additional pathways, play a role in maize meristem maintenance. In addition, DEGs were enriched for GO terms “response to heat/temperature stimulus”, supporting findings from the growth chamber experiments. Fine mapping and whole genome re-sequencing placed the Sos2 mutation in a roughly 223kb region on the short arm of chromosome 10 (bin 10.01). This mapping, coupled with transcriptomic studies, identified a strong candidate gene, which is significantly increased in expression in Sos2 mutants. Therefore, this study paints a comprehensive picture of how Sos2 functions in maize development and provides a novel player in the canonical meristem maintenance pathway. 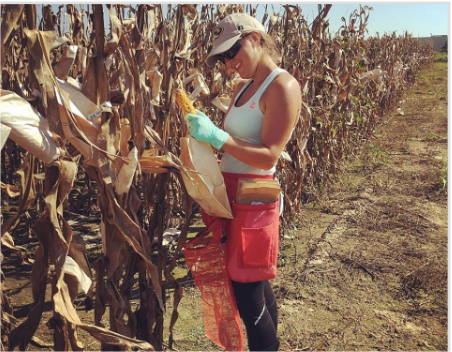 Katy will be continuing her academic career at Cornell as an Active Learning Initiative Post-Doctoral Fellow. Her job will include working with professors to transition core classes to active learning communities within the School of Integrative Plant Sciences. Her research will include assessment of active learning activities.

Her long-term goal is to obtain a position at a primarily undergraduate institution (PUI). 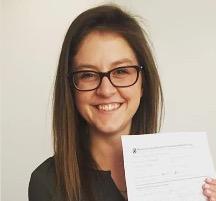