The evolution and diversification of neotropical orchids

The Neotropics extends from southern Mexico through Central America, the Antilles, and northern South America to southern Brazil, including more tropical rainforest and biodiversity than any other region on earth. The region harbors around 90,000-110,000 of seed plant species and contains five prominent biodiversity hotspots around the world. There are 728 recognized genera and approximately 29,000 species of Orchidaceae worldwide, with around 488 genera and 12,983 species in the Neotropics accounting for about 45% of the total orchid diversity in the world. How did this remarkable orchid biodiversity originate and evolve? Here, I will address this question reviewing classical botanical literature and recent findings of my own and collaborators. Advances in orchid phylogenies provide an evolutionary framework essential to understanding processes and patterns that have given rise to the spectacular orchid Neotropical biodiversity. Orchid epiphytism and its morphological, physiological, and ecological implications could be responsible for this spectacular diversity. As well as the geological history of the region and abiotic factors such as precipitation, altitude, and latitude among others. Integrating perspectives from different fields will be essential to better understand why there are so many orchid species in the Neotropics. 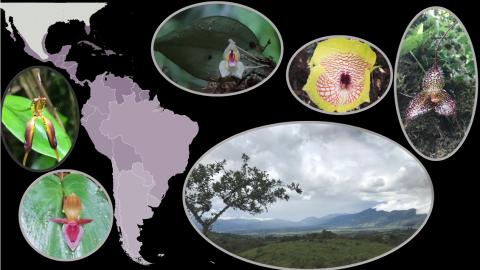