An Integrative Approach to Dissecting the Genetic Basis of Learning, Memory, and Thermal Tolerance in a Fruit Fly Model

Learning, memory, and thermal tolerance are complex traits that are fundamental survival skills in many species. For example, small poikilotherms –like Drosophila melanogaster, have evolved physiological mechanisms to learn from and adapt to rapidly warming temperatures because their body temperature reflects that of their surroundings. Along with physiological mechanisms, these animals have also adapted cognitive practices, such as learning and memory, which help them escape extreme temperatures. Although scientific evidence shows that learning, memory, and thermal tolerance have been subjected to natural selection as a means of adapting to warmer temperatures, studies examining both traits (i.e., learning, and thermal tolerance) and how they relate genetically have not been done. Investigating the natural variation of the genes that control these traits is essential if we want to understand better how these traits arise within species. With recent advances in genomic technology, it is now feasible to tease apart - down to a single gene - regions of the genome that influence complex phenotypes. For my Ph.D., I took a quantitative genetics and genomics approach to dissect the genetic basis of learning, memory, and thermal tolerance in Drosophila melanogaster.

I hypothesized that there will be a shared and independent genetic locus controlling learning and memory and that there will be a trade-off between learning and thermal tolerance. To genetically dissect learning and memory performance, I used the Drosophila Synthetic Population Resource (DSPR), a multiparent mapping resource, consisting of a large set of recombinant inbred lines (RILs), which allows for high-resolution genome-wide scans, and the identification of loci contributing to naturally occurring genetic variation. Using a highly sensitive apparatus known as the “heat box”, we trained flies with temperatures (24°C and 41°C, which is aversive) to learn to remain on one side of a chamber (place learning) and to remember this (place memory). An individual that spent most of the time on the side of the chamber associated with 24°C will be considered to have high learning and memory. Immediately after, I assayed the flies for thermal tolerance, which is measured as the time to incapacitation at a constant high 41°C temperature for 9 ½ mins. I identified 16 different loci across the genome that significantly affect place learning and or memory performance, with 5 of these loci affecting both traits and eight loci that influence thermal tolerance. To identify transcriptomic differences associated with learning, memory, and thermal tolerance, I performed RNA-Sequencing on pooled samples of seven high performing and seven low performing RILs for all three traits and identified hundreds of genes with differences in expression. Integrating our transcriptomic results with the mapping results allowed us to identify nine promising candidate genes that control learning and twenty-one genes that fall between the most significant QTL that’s possibly influencing thermal tolerance. Future work will aim to validate the function of these genes. 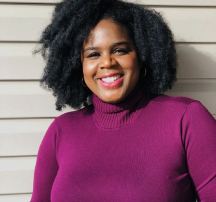 Dr. Williams-Simon received an NSF Postdoctoral Fellowship to continue her investigations into the genetic basis and rapid evolution of complex life history traits. She is carrying out her postdoctoral work with Dr. Paul Schmidt at the University of Pennsylvania. 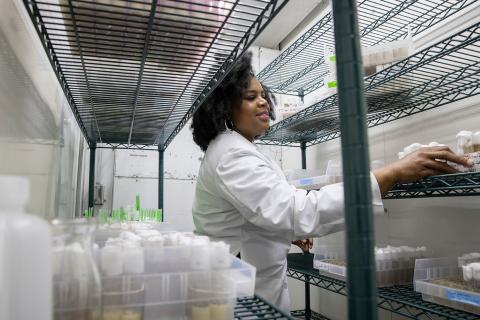