Ecological genomics of divergence, admixture, and fitness in the smallmouth bass (Micropterus dolomieu)

To address the need for a robust understanding of the divergence and evolution history of Smallmouth Bass in the Central Interior Highlands, I addressed three broad areas concerning the phylogeography and conservation of the species using a combination of morphological, genetic, and genomic data: 1) patterns of genetic and morphological differentiation between the Neosho and Northern Smallmouth Bass subspecies, 2) lineage diversification and the extent and origins of admixture within the subspecies, and 3) effects of admixture on individual growth and fitness in two streams within the Neosho Smallmouth Bass native range.

Using neutral microsatellite markers and a combination of three independent Bayesian analysis methods, I detected complex and hierarchical population structure of Smallmouth Bass in the Central Interior Highlands. The Northern and Neosho subspecies were morphologically distinct overall based on principal component analysis of five morphometric traits, but they significantly differed only in head length.

Based on genome-wide variation at over 50,000 single nucleotide polymorphisms, the Neosho and Northern subspecies represented two diverged, monophyletic clades, each comprising two additional monophyletic lineages. Admixture in the Illinois River system within the Neosho range originated from a hatchery strain of Northern Smallmouth Bass found in Skiatook Lake, Oklahoma, while admixture in the Elk River, upper Arkansas River tributaries, and the Illinois Bayou and Big Piney Creek system originated from the White River in the Northern range. Demographic analysis revealed that admixture in these streams has occurred on different time scales, in some cases likely due to historic migration, and in other cases likely due to secondary contact, possibly as a result of anthropogenic introductions.

In Big Sugar Creek and the Elk River, two Neosho Smallmouth Bass native streams known to be admixed with White River Northern Smallmouth Bass, individual growth did not differ between genetically pure Neosho, pure Northern, or admixed fish. However, in the Elk River alone, average length-at-infinity (maximum length) was lower for admixed fish than for either pure Neosho and pure Northern fish. We also found a significant negative relationship between multi-locus heterozygosity (based on fourteen microsatellite loci) and body condition, suggesting that increased intermixing may be causing outbreeding depression in these streams.

The Neosho and Northern Smallmouth Bass constitute highly differentiated, locally adapted, and independently evolving lineages in the Central Interior Highlands. Despite divergence, there are also complex and extensive patterns of admixture in the Neosho range which may be contributing to lower fitness in two Neosho Smallmouth Bass streams. It will be crucial to consider these patterns and their potential outcomes in the development of management protocols for the preservation of endemic diversity within this economically and ecologically vital sportfish. 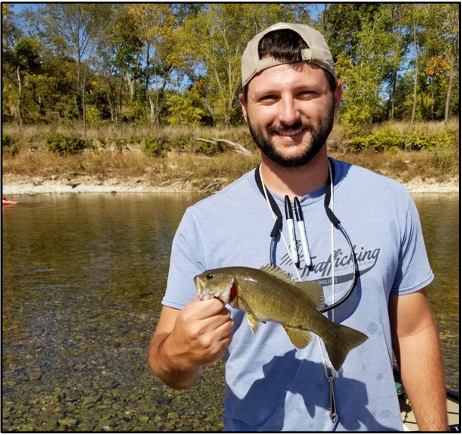 Joe Gunn has accepted a position as a postdoctoral fellow at the University of Missouri in the lab of Dr. Elizabeth King, where he will be continuing to do research in eco-evolutionary genomics on a project exploring the genomic basis of local adaptation and life history trait evolution. He also will be teaching general ecology and molecular ecology courses. 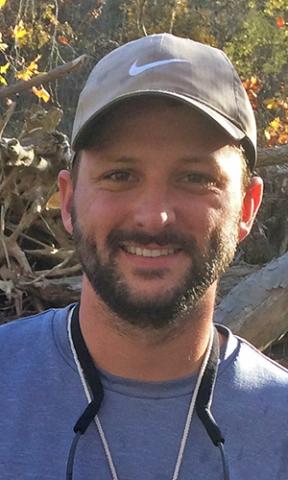