This seminar is a Ph.D. defense.

The FBM neurons are a subset of the branchiomotor neurons, which are generated in the vertebrate hindbrain and innervate facial and jaw muscles. During development in zebrafish and mice, FBM neurons migrate caudally from rhombomere 4 (r4) to r6 to form the facial motor nucleus and innervate jaw and gill muscles (in fish). In order to examine the consequences of aberrant neuronal migration, one must first characterize the normal functional output of the FBM circuit that drives jaw movements. In collaboration with colleagues in the MU Department of Electrical Engineering and Computer Science, we developed an automated image analysis system to extract motion features from video recordings of jaw movement, enabling rapid and accurate high-throughput analysis.

We used this software to examine the emergence of jaw movement in zebrafish larvae between 3-9 days post fertilization (dpf). While gape, the displacement of the lower jaw to form the mouth opening, was minimal at 3 dpf, gape frequency increased sharply by 5 dpf, and stabilized by 7 dpf. A detailed analysis of branchiomotor axons and neuromuscular junctions (NMJs) on jaw muscles suggests that this “maturation” of branchiomotor circuit output may be driven by changes in presynaptic structures at the jaw NMJs.

To evaluate the consequences of defective neuronal migration on circuit output, I examined whether jaw movement was affected in the zebrafish off-limits (olt) mutant in which FBM neurons fail to migrate out of r4. In olt mutants, the increase in gape frequency occurred normally between 3-5 dpf.  However, the average gape frequency was ~50% lower than in wildtype siblings from 5-9 dpf while gape amplitude was unaffected. Given the jaw movement defect in olt mutants, I evaluated food intake, an independent measure of jaw movement and another functional output of the branchiomotor circuit. Olt mutants ate poorly compared to their wildtype siblings, consistent with their reduced jaw movement. I tested several potential mechanisms that could generate the functional deficits in olt mutants.

While fzd3a, the gene inactivated in olt mutants, is ubiquitously expressed in neural and non-neural tissues, jaw cartilage and muscle developed normally in olt mutants, and muscle function also appeared to be unaffected. Although FBM neurons were mispositioned in olt mutants, axon pathfinding to jaw muscles were unaffected. Moreover, neuromuscular junctions established by FBM neurons on jaw muscles were similar between wildtype siblings and olt mutants. Interestingly, FBM axons innervating the interhyoideus jaw muscle were frequently defasciculated in olt mutants. Furthermore, GCaMP imaging revealed that mutant FBM neurons were less active than their wildtype counterparts. These data suggest that aberrant positioning of FBM neurons in olt mutants results in subtle defects in fasciculation and neuronal activity, potentially generating defective functional outputs. In the future, we will examine modulatory inputs from other brain regions to the branchiomotor neurons and examine their roles in impacting circuit output in olt mutants. 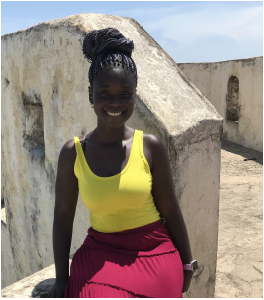 Dr. Asante has accepted a postdoctoral position at St. Jude Children’s Research Hospital in Memphis in Dr. Andrew Kodani’s lab, where she will be investigating mechanisms underlying neurodevelopmental disorders. 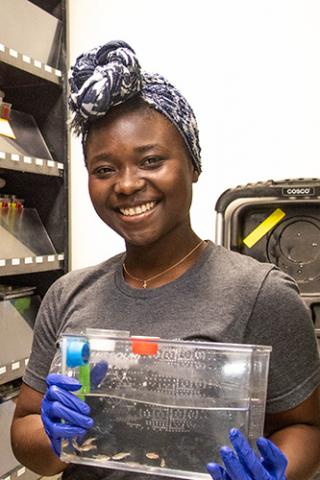