Abraham “Abe” Eisenstark, Professor Emeritus of Biological Sciences at the University of Missouri, died last Tuesday (August 28). He was 98.

“Abe was a great role model for young scientists. He was incredibly enthusiastic about science and completely committed to biomedical discovery and the training of the next generation of biologists. He was a gentleman and always willing to help,” shared Professor Steve Alexander of his friend and long-term colleague. “He will be remembered and missed.”

Prof. Eisenstark received both his undergraduate and graduate degrees in microbiology from the University of Illinois. As part of his Ph.D. dissertation, which he completed in 1948, he showed that penicillin worked to stop infection by interfering with the cell wall during bacterial division. The results of his work were published in Science magazine in 1947. Following his Ph.D., he accepted a faculty position at Oklahoma State University, where he rose very quickly to associate professor. He subsequently joined the faculty at Kansas State University, where he stayed for two decades (1951-1971). Before coming to MU, he spent a year as a program director at the National Science Foundation. 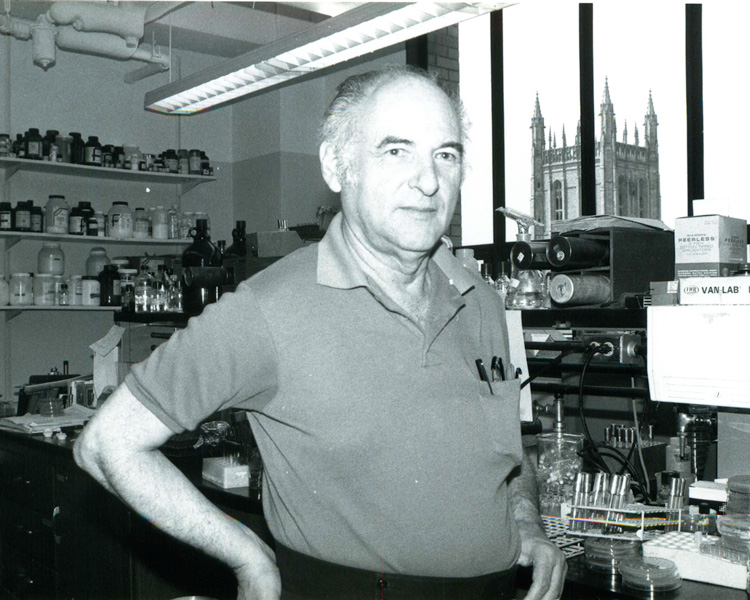 Dr. Abe in his lab on the third floor of Tucker Hall.

MU recruited Prof. Eisenstark to its campus in 1971 to lead the Division of Biological Sciences. The Division recently had been established by the merging of three academic units, the Departments of Botany, Zoology, and Genetics. As its new Director, Prof. Eisenstark was charged with forging a unified departmental identity while also establishing the department as a leader in the biological sciences. “My first aim, my most important aim was to build a faculty,” he recalled later in a *2013 interview. As a consequence, one of the enduring legacies of Prof. Eisenstark’s 9-year tenure as Director was the diverse group of young scientists he recruited to join the Division. Among them were two cell and molecular biologists, Drs. Don Riddle and George Smith; a microbiologist, Dr. Miriam Golomb; three ecologists, Drs. John Faaborg and Sue and Steve Chaplin; two developmental biologists, Drs. John David and Louis Sherman; and the Division’s first neurobiologist Dr. Philip Jen.

Another lasting contribution to the Division is the Roma Eisenstark Memorial Lecture in Cancer Research, which Prof. Eisenstark established in 1984 in memory of his late wife Roma. The endowment has enabled the Division to host several distinguished investigators who have made fundamental contributions to our understanding of cancer. Following his retirement from MU in 1990 at the age of 70, Prof. Eisenstark went on to serve as Director of the Cancer Research Center in Columbia, MO, a position he held for another two decades. He maintained a Professor Emeritus appointment with the Division and continued to conduct his science as a member of both institutions.

Prof. Eisenstark’s research career in microbiology spanned seven decades. Some of his contributions were highlighted in the Division’s Fall 1991 Alumni Newsletter. They include defining the nature of Newcastle virus and the observation of “incomplete” viral particles usable for use in vaccines; development of “recombinationless” strains of Salmonella typhimurium; the discovery that bacteriophage can transfer plasmid genes as well as chromosomal genes; and the establishment of the antigenic and morphological properties of the mutator phage, mu-1, a bacterial virus that has been important for understanding gene transposition and the development of molecular genetics. During his post-“retirement” years, he defined genes crucial to bacterial recovery from near-ultraviolet damage, genes essential for bacteria surviving during prolonged dormancy, and genes that allow bacteria to survive oxidative stress. In a 2016 article published in the journal PLoS One, he and his colleagues at the CRC reported on a non-toxic strain of Salmonella that can penetrate and target prostate cancer cells. The strain is derived from a collection of Salmonella collected by geneticist Milisav Demerec and curated by Prof. Eisenstark for over 50 years.

When asked in a *2013 interview what scientific achievement he was most proud of, Prof. Eisenstark responded by quoting the two-time Nobel laureate Linus Pauling. “He said that the greatest thing for him was to walk into his laboratory and to see the results of an experiment and to be able to say, ‘Wow. I am looking at something that nobody, nobody else in this wide world knows.’ It’s those kinds of exhilarations that have been fun,” said Eisenstark.

Prof. Eisenstark was the recipient of many awards and honors in recognition of his research and teaching. The University of Missouri System selected him for its prestigious Thomas Jefferson Award and the MU campus awarded him the William H. Byler Distinguished Professor Award. In the 2013 interview, Prof. Eisenstark shared that he was particularly proud of being awarded a Guggenheim Fellowship, an honor he received in 1958 that allowed him to study for a year with the distinguished Danish microbiologist Ole Maaløe at the University of Copenhagen.

Prof. Eisenstark was a beloved mentor and teacher. His teaching and mentoring style was described as enthusiastic and caring, and he was known to challenge students to learn about and understand science, not just accumulate facts. According to his 1989 curriculum vitae, Dr. Eisenstark trained 20 Ph.D. students and 23 MA students, most of whom went on to hold faculty positions at universities throughout the world. One of those students is Philip S. Hartman, Dean of the College of Science & Engineering and Professor of Biology at Texas Christian University. In 2017, Dr. Hartman established the Dr. Abraham Eisenstark Faculty Fellowship Award in Biological Sciences at MU in honor of his former mentor.

To learn more about Dr. Eisenstark’s long life in science, you can read his autobiographical article, titled “Life in Science: Abraham Eisenstark,” in the January 2014 issue of Bacteriophage. His obituary was published in the Columbia Tribune. 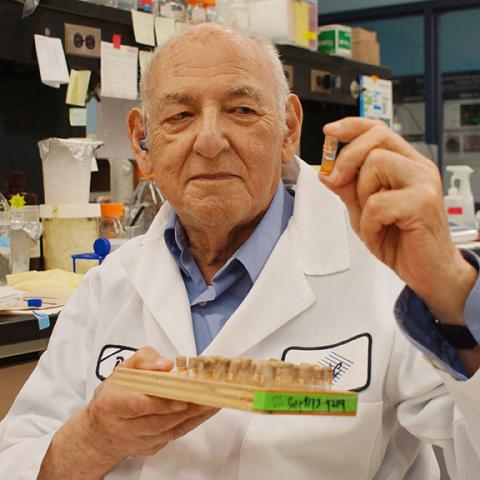