A new treehopper species discovered in a rainforest reserve in Costa Rica by two U.K. researchers has been named Cladonota rex in honor of Reginald “Rex” Cocroft, professor of biological sciences at the University of Missouri.

Cocroft has been studying the behaviors and ecology of treehoppers for over three decades. These plant-feeding insects are best known for the elaborate “helmet,” or pronotum, that protrudes from their back and often resembles a plant thorn. Cocroft has focused on another unusual feature: their ability to communicate by vibrating plant stems. Through a series of elegant studies, he has shown these vibrations are used to attract mates, announce the discovery of good feeding sites, and signal the approach of predators — demonstrating the richness and complexity of this widespread, yet “hidden” form of social communication.

The new treehopper is part of the genus Cladonota, meaning “branch-backed” in reference to the shape of the helmet.  A single specimen of C. rex was found on the leaf of a plant growing alongside a riverbank in La Selva, a lowland tropical rainforest in northeastern Costa Rica. Researchers identified it as a new species based on its distinctive yellow-green stripe along its back and the open C-shape of its helmet. The researchers reported the discovery in the journal Zootaxa. 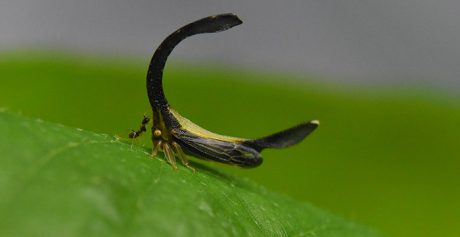 Sam J. England, a graduate student in the School of Biological Sciences at the University of Bristol, discovered the treehopper species. He said that he, along with his coauthors, chose the species name rex in honor of Cocroft’s “immense contributions” to our understanding of treehopper behavior and ecology.

“I wanted to name the species after Rex to honor his contribution, both to the scientiﬁc community as a whole, and to me personally,” said England, who is first author on the Zootaxa paper. “Despite treehoppers being some of the most weird and fantastic creatures on Earth, we actually know very little about their behavior and how they live their lives. Rex has contributed a huge, perhaps unrivalled, amount of scientiﬁc work to begin rectifying this knowledge gap, and therefore his publications have been an incredibly valuable resource to me in pursuit of my PhD.”

Cocroft, who was not involved in the discovery, said he was surprised and touched when England emailed him about naming the new species after him.

“It’s an honor to have this unique connection to these creatures that I appreciate so much,” said Cocroft. “I think that the bigger message of this particular discovery is that it shows that insect diversity is so vast that a lot of insects have probably never been seen by humans and certainly never been described. And, a lot of these species are going extinct at an alarming rate. It points to the importance of, and need for, more taxonomic research to document the biodiversity around us in order to help preserve and protect it.”

Cocroft said he has never seen C. rex in person but would love to visit La Selva and see it in the wild someday.

Cocroft is the recipient of the Insect Drummer Award for lifetime achievements in vibratory communication research and the Animal Behavior Society’s Quest Award, given to a scientist who has made outstanding seminal contributions to the science of animal behavior. 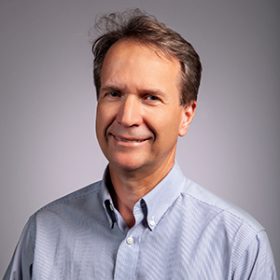