From the Lab: Lizards, scientists think outside the box

Stealing from the cookie jar may seem like child’s play. Turns out, lizards are also pretty clever at finding ways to nab a tasty treat.

In a new study from the Leal lab, Levi Storks tested if Anolis sagrei perched on trees could swipe a tasty maggot from inside a transparent cylinder. The free-living lizards overcame their natural impulse to grab at the prey in a single burst of movement and entered the cylinder from the side. The ability to override a natural motor impulse and choose a more effective behavior – to think outside the box, as it were — is known as motor self-regulation. This cognitive response has been documented in birds and mammals but was not expected to be shown by lizards and even less by free-living lizards.

“Yet again, studies of lizard’s cognition continue to challenge previous expectations with regard to their limited cognition,” said Storks, who is a graduate student in the Division. “Our findings that A. sagrei exhibit motor self-regulation provide further evidence that the cognitive abilities of Anolis lizards, and more generally reptiles, have been under-appreciated, as this ability is commonly suggested to underpin higher cognitive processes such as decision making and problem-solving.”

Notably, the study also shows that it is possible to measure cognition with free-living animals in nature rather than with captive animals under controlled conditions in a laboratory or semi-natural conditions. Stork’s “outside the box” approach reduces stress on the animal and does not present conditions that greatly differ from what the animal encounters normally in nature. According to the authors, studying animals in their natural habitat also “provides an opportunity to measure cognition under the conditions in which selection has shaped the evolution of these traits and under which the ability to solve a novel task is likely to be a better predictor of behavioral flexibility and innovation.”

It has been predicted that 20 percent of all lizards species will go extinct by 2080 due to rising temperatures. Knowing how lizards and other reptiles handle novel ecological challenges is critical to conservation efforts. 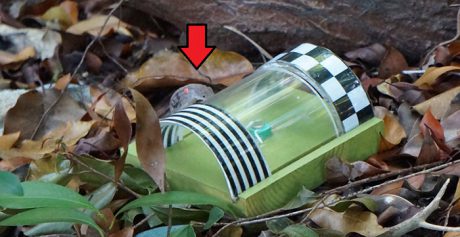